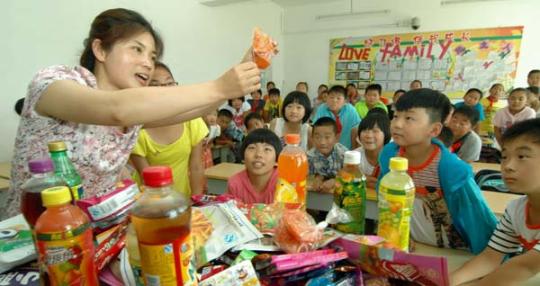 Students have a lesson in food safety in Linghai city, Liaoning Province on June 18, 2013. (Photo by Li Tiecheng/Asianewsphoto)

China will establish a system that rewards whistleblowers who expose food or drug safety problems, as a measure to improve supervision and deter violations of the law, a senior official for market regulation said on Tuesday.

Whistleblowing can play an important supplementary role in monitoring food and drug safety, based on global experience, Zhang Mao, minister of the State Administration for Market Regulation, said at an international forum on food safety cooperation during the China International Import Expo in Shanghai.

"Whistleblowers have played a role in exposing problems in most food and drug safety cases," he said, adding that a recent vaccine scandal that shocked the nation was the result of whistleblowing.

Companies will face much heavier punishments, including huge fines, for offenses involving food and drug safety in an attempt to deter such violations, Zhang said.

Zhang said food safety is a priority in market supervision in China, and the country will do its utmost to improve it.

"We will work with all other countries to make more contributions to improving people's health," he said.

China's National Medical Products Administration, which is part of the State Administration for Market Regulation, announced during an inspection in July that it found Changchun Changsheng Bio-tech Co, a major vaccine producer in Changchun, Jilin province, to have fabricated production records and that it committed other serious violations of the law in producing rabies vaccine.

Chen Junshi, a member of the Chinese Academy of Engineering and a food safety expert, said rewarding whistleblowers can encourage the public to be active in enforcing food and drug safety, though the primary responsibility lies with the companies themselves and the government.

"The measure is a means of supervision, but it cannot replace government supervision and self-discipline from companies, which play more important roles in ensuring food and drug safety," he said.

Although a specific regulation at the national level to reward whistleblowers is lacking, some places in China have their own regulations.

For example, under a regulation adopted in April in Dalian, Liaoning province, employees who report problems to their employers or local authorities can receive financial rewards from the local government if the reports are proved authentic.