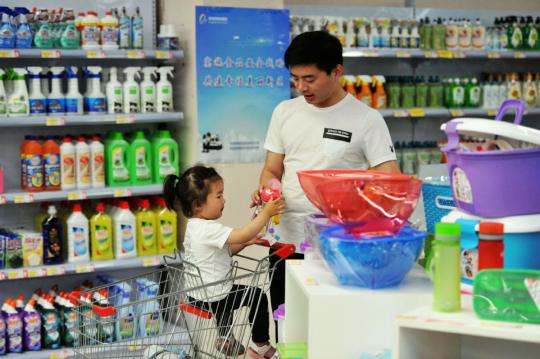 China's eagerness to boost imports is driving the current account balance amid downward pressure, and the trend could be intensified after the year's biggest import tariff cuts take effect, influencing sentiment on financial stability and the exchange rate, according to experts.

A new round of tariff reduction, on a wide range of industrial products and raw materials, began on Thursday, which drives down the country's overall tariff level for all categories to 7.5 percent from 9.8 percent in 2017.

The refreshed tariff level, on average, is slightly higher than the European Union standard, but lower than most developing countries, which matches China's current development status, said an official from the Customs Tariff Commission of the State Council.

On the tariffs cut list, there are 1,585 categories of goods, including textiles, metals, electromechanical equipment and other raw materials and products. The affected items account for about 19 percent of the total number of taxed imports in China, according to a statement on the Ministry of Finance's website.

"Reducing import tariffs on some industrial products, that are much needed domestically, could attract more foreign capital and increase efficient market supply in China. It can also support the upgrading of industries and lower production costs," said the official.

Earlier this year, China lowered import tariffs on a range of goods, including automobiles, medicines and some other daily consumer products.

"China's current account surplus will fall close to zero this year," he said. "And it is also possible that the country will run a modest current account deficit in the coming years."

Zhang Ming, chief economist with Ping An Securities, said that the possible changes of the current account balance needs high attention. It may influence the market sentiment on financial stability, as the foreign exchange reserve may increase at a slower pace or even face downward pressure if the currency depreciation pressures rise.

The country recorded a current account deficit in the first quarter this year, at $34.1 billion, the first deficit since the second quarter in 2001.

A study from Oxford Economics, a British think tank, indicated that China's strong demand growth drove an average annual expansion of the real "normal" imports, meaning imported goods used in the domestic economy, at a rate of 8.9 percent from 2008 to 2017. It was in line with the fall in the current account surplus as a share of the GDP, from 9.9 percent in 2007 to 1.3 percent in 2017.

Lower import tariffs, in addition, have contributed to an overall drop of the Chinese government's tax revenue in the first three quarters.

Data from the Ministry of Finance showed that by the end of September, the government's income through levying import tariffs reached 221.6 billion yuan ($31.91 billion), a year-on-year decline of 0.9 percent. The total tax revenue growth slowed to 12.7 percent in the first three quarters from 14.4 percent in the first half.