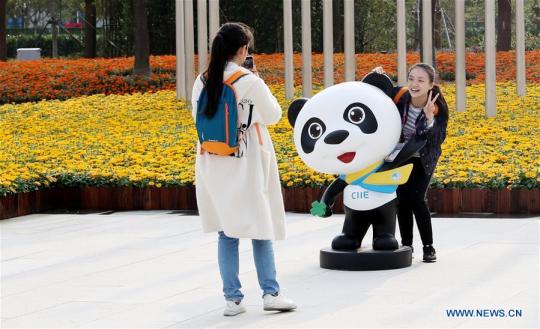 A volunteer for the upcoming China International Import Expo (CIIE) poses for a photo with the mascot "Jinbao" outside the National Exhibition and Convention Center in Shanghai, Oct 26, 2018. [Photo/Xinhua]

SHANGHAI - Twenty foreign companies, among over 1,000 that have submitted pre-registration, have signed contracts to attend the second China International Import Expo (CIIE) scheduled next year, according to the CIIE Bureau.

The pre-registration for overseas companies and institutions to attend the second CIIE started on July 1, attracting over 1,000 applications on its official website.

According to the bureau, the first batch of 20 companies are from countries like New Zealand, Japan, Australia, covering service trade, apparel, consumer goods, food and agricultural products, medical equipment and health care.