Daxing airport on pace for 2019 start 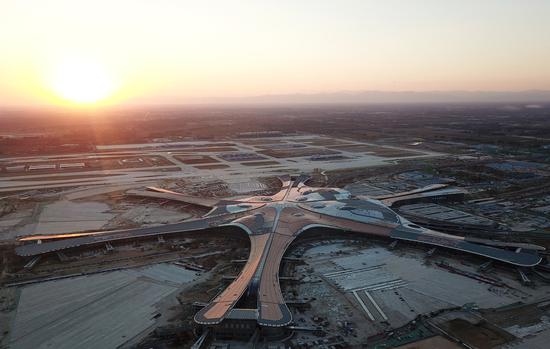 The capital on Friday took local and international media on a tour of the Beijing Daxing International Airport, which is expected to start operating in the middle of next year.

Located on the border of Beijing and Langfang, Hebei province, the new airport, which will be Beijing's second international airport and is positioned to be a large international hub, is now undergoing interior decoration, according to Zhang Xiaofeng, deputy manager of the terminal construction department.

He said the decoration will be completed by the end of this year and the airport is planned to open in 2019.

The project, which costs 80 billion ($11.5 billion), is 46 kilometers from Tian'anmen Square, 26 km from downtown Langfang in Hebei, 55 km from Xiongan New Area, and 67 km from the existing Beijing Capital International Airport, and is expected to serve as the airport hub for North China.

With four runways and a 700,000 square meter terminal area, the airport is expected to be the world's largest airport upon completion.

The first phase of the airport project is designed for a target of 72 million passengers, 20 million metric tons of cargo and mail, and 620,000 aircraft movements in 2025, with plans to handle 100 million passengers in the long term.

"We have adopted natural light in the terminal design as much as possible and lots of technological innovation in the construction of the integrated transportation," said Zhang Ru, representative of the project headquarters.

She said the project includes five vertical and two horizontal integrated transportation networks, which will combine highway, intercity railway, high-speed railway and subways with the airport as the center.

Combined with the construction of the Daxing airport, China has planned an airport economic zone. In future, the nation's international communication center area, aviation technology innovation leading area, coordinated development demonstration area of Beijing-Tianjin-Hebei will be formed with the Daxing airport at its core.