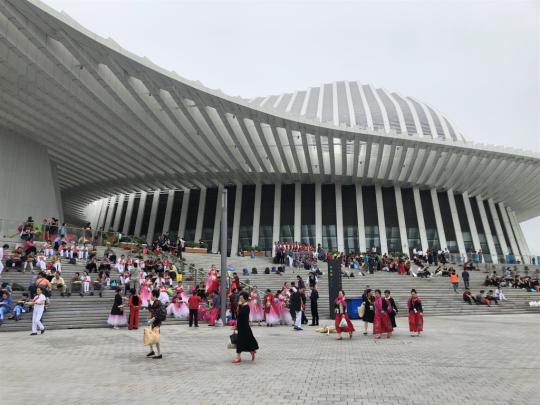 A number of culture and sport venues have emerged here, many of them becoming new city landmarks. The main stadium of Guangxi Sports Center shaped like two leaves floating in the air was completed in 2010. The Guangxi Culture and Art Center shaped like three Karst hills peaking through the clouds has been put into operation at the beginning of this year. The new Nanning library shaped like terrace will open to public by the end of this year.

In addition, schools, hospitals and parks have also been established in the district to provide the public services.

The district looks beyond the capital and the province to the ASEAN countries, making Nanning more international and better play its role in the Belt and Road Initiative. The China-ASEAN Information Harbor has been set up to promote the penetration of the Internet, collect and share information on economy and finance, agriculture, logistics, education and health care between two sides.

Nanning is China's nearest capital city to the ASEAN countries and Guangxi borders Vietnam, one of them, to the Southwest.

According to the plan, the Wuxiang New District will be progressed into a business center, regional trade base, logistic center, manufacturing base, cultural hub and information exchange center for the China-ASEAN Free Trade Area in the future.