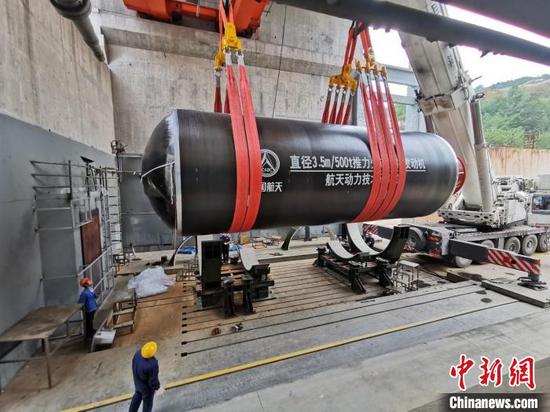 The booster engine, with a diameter of 3.5 meters and a maximum thrust of 500 tons, is the most powerful solid rocket engine with the largest thrust in the world so far.

The successful test run marks a substantial improvement to the payload of China's solid propellant rockets, offers more power options for the development of its carrier rockets, and is of great significance in promoting the development of the country's large and heavy rockets.

Based on the newly test booster engine, its developer, the Fourth Research Institute of China Aerospace Science and Technology Corporation (CASC), has begun its study of the five-stage booster engine, the diameter of which can reach 3.5 meters and thrust, 1,000 tons.

The future booster engine is expected to be used in large and heavy rockets to satisfy various demands for launch vehicles during space missions like manned Moon landings and deep space exploration.

The working method of the solid rocket engine consists of several steps. Solid propellant burns in the combustion chamber after ignition, which converts chemical energy into heat and produces combustion products at high temperature and high pressure.

Combustion products flow through the nozzle where they expand and accelerate, converting heat energy into kinetic energy, which is discharged from the nozzle at high speed to generate thrust.