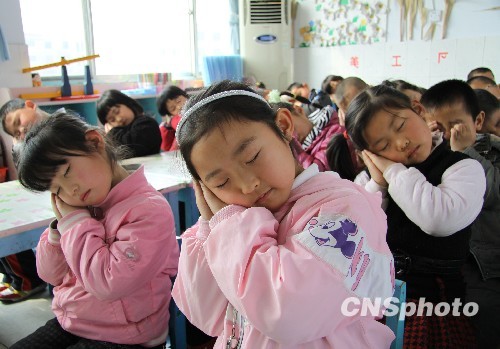 Pupils do eye exercises in the class. (File photo)

(ECNS) -- Over 300 million Chinese suffer sleep disorders, while the proportion of insomnia in exercisers is only 10 percent, according to 2021 White Paper on Exercise and Sleep jointly released Thursday by Chinese Sleep Research Society and DeRUCCI before the World Sleep Day, Mar. 21.

The white book, covering 13,854 effective samples from across China, shows people making more money sleep less. People with monthly incomes of 3,000 yuan (about 461 US dollars) and sleep below 8.19 hours a day on average, while those with monthly incomes of 25,001 yuan to 30,000 yuan averagely sleep 7.73 hours per day. Lawyers, business executives and doctors often stay up late because of overtime.

Besides, the average score of sleep quality among Chinese entrepreneurs is 64.93, of which 73 percent have experienced insomnia; most of the middle class group suffer unhealthy sleep; 56 percent of Internet users said they have sleep problems, with work stress the primary factor affecting sleep; 90 percent of young people use electronic products before going to bed and among them, 91 percent feel they "don't sleep enough" and "are still tired after sleep".

According to the survey, about 38 percent of Chinese adults have trouble with sleep, about 10 percent higher than the world average of 27 percent, said Guo Xiheng, a Chinese Sleep Research Society official.

Over 300 million Chinese suffer sleep disorders, while the proportion of insomnia in exercisers is only 10 percent. This means the general population is more likely to suffer from insomnia than exercisers by nearly four times, Guo added. He suggested people should do more exercise to improve their sleep quality.