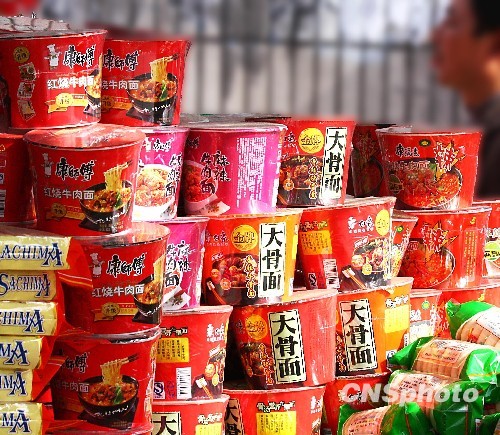 (ECNS) -- Known for their convenience, low cost and diverse culinary styles, instant noodles seem to have made a comeback in China, Securities Daily reported.

Both revenue and profits of China's food industry increased last year, among which the instant noodles sector regained momentum after industrial upgrade, accounting for nearly 40 percent of global sales, according to data released at a conference recently.

Data from Nielsen shows Chinese consume more than 40 billion packets of instant noodles annually, with sales revenue in the first half of this year up 7.5 percent year-on-year.

Total consumption of instant noodles worldwide reached 103.6 billion units in 2018, with about 40.25 billion units or 39 percent of the total sold in China, according to a report from advisory firm Ries Consulting.

Some analysts ascribe the downturn to the rise of online food services supported by Internet giants in the online-to-offline (O2O) market as the country saw an increasing use of QR codes, mobile payments and booming smart startups.

A woman told the paper her family often stores one box of instant noodles at home because she thinks they are more hygienic and cheaper than those ordered online and delivered to homes.

Among many varieties, braised beef noodles have long been a favorite among consumers, but young people born after 1995 are more interested in new tastes and experiences.

The two most popular brands of instant noodles in China, Master Kong and Uni-President, account for 80 percent of the market, both reporting higher growth in high-end noodle varieties.