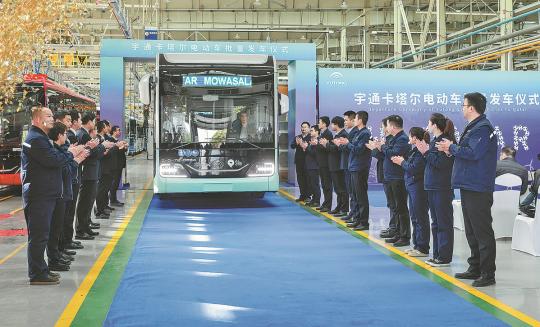 The FIFA World Cup 2022, which kicked off on Sunday, has lured more than 1 million soccer fans to Qatar from across the globe, rooting for their favorite stars and teams, sharing their fervor for the world's most popular sport.

Team China is missing out in the competition, but a host of Chinese companies, from stadium builders to water providers, have been contributing their efforts to ensure the success of the extravaganza held in the Middle Eastern country.

More than 1,500 buses from China's leading bus maker Yutong are plying the streets of Qatar. Some 888 are electric, offering shuttle services for the thousands of officials, journalists and fans of different countries.

Yutong's electric buses, which have a range of more than 200 kilometers on one charge, account for one-fourth of the buses running in the country during the event.

"The 888 Yutong e-buses will bring green transportation to the world's biggest football event, and the Yutong Qatar service team is ready to provide an unprecedented green travel experience for fans from all over the world," said Gan Shaoying, deputy managing director of Yutong Qatar.

The bus maker said it has built a team of 126 people to ensure everything goes smoothly, ranging from preventive maintenance checks, spare parts in stock to troubleshooting.

Training has been held for more than 2,000 drivers, along with special sessions on the rapid maintenance of the electric buses.

"With our service, we guarantee zero breakdowns and zero complaints for those football fans traveling in Qatar," said Gan.

The Yutong fleet in Qatar also marks the first time that Chinese new energy buses have been used in a major global sports event.

The organizers of the World Cup Qatar have vowed to make the event carbon neutral, saying: "we're aiming to shift 25 percent of public buses to electric buses by 2022 for use during the tournament. This technology will reduce greenhouse gases and air pollution."

"Our goal is to offset all greenhouse gas emissions, while advancing low-carbon solutions in Qatar," the organizers said.

The goal also has a lot to do with Qatar's vision that by 2030 the country will become capable of sustaining its development and providing a high standard of living for its people.

Yutong said it is building a knockdown plant in Qatar to facilitate the country's campaign. The plant is expected to become operational in November 2023.

Besides Qatar, Yutong is exporting its electric vehicles to several countries, including France, the United Kingdom and Norway, as the world shifts toward emissions-free transportation.

The bus maker is one of the Chinese vehicle companies that are drawing attention at global events.

A total of 300 Air EVs made by China's Wuling served as shuttle vehicles at the 17th Group of 20 or G20 Summit held last week in Bali, Indonesia.

Other electric vehicles used during the summit were from South Korea's Hyundai and Japan's Toyota.

The Wuling Air EVs were made at Wuling's Bekasi production base in West Java, Indonesia.

Xu Haidong, vice-chief engineer of the China Association of Automobile Manufacturers, said Chinese companies are competitive globally in terms of new energy vehicles, as China has an early-mover advantage in the segment and China's huge market has stimulated companies to improve their products.