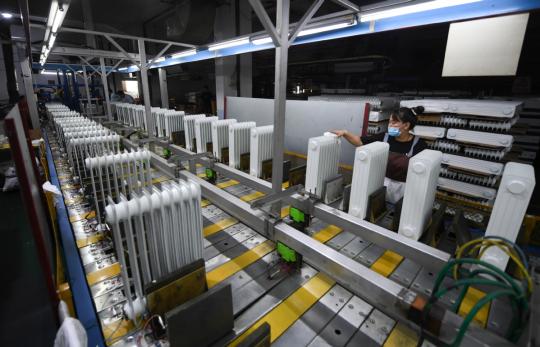 Chinese makers of heating appliances, including electric blankets and electric heaters, have seen explosive growth in exports to Europe as the continent heads into winter in the throes of an energy crisis amid rising prices of natural gas, industry experts said.

Statistics from AliExpress, Alibaba Group's business-to-customer or B2C site that sells consumer goods to overseas markets, showed sales of heating appliances, such as electric blankets, in the European market surged nearly 300 percent in September compared with that in August.

Sales of Chinese heating appliances in France, Germany and Poland skyrocketed 306 percent, 303 percent and 297 percent month-on-month, respectively, during this period, given that European consumers are expanding their purchases of heating appliances ahead of the approaching winter.

Moreover, there is surging demand for heat pump water heaters, which gather ambient warmth from the air and compress it to heat up water, especially in Germany, Poland, the Netherlands and the United Kingdom, with orders soaring more than 100 percent year-on-year in the past 90 days, said Alibaba.com, the business-to-business platform of Alibaba.

In July, the European Union's 27 member states imported 1.29 million units of electric blankets from China, an increase of 150 percent compared with 521,000 units in June, China's General Administration of Customs said.

In addition, exports of air source heat pumps are expected to maintain a more than 50 percent growth rate this year, according to ChinaIOL.com, a professional research institute focusing on data monitoring in the home appliances market.

Jiang Han, a senior researcher at market consultancy Pangoal, warned that the Europe is currently short of energy, but not home appliances.

Chinese home appliance brand Midea Group is ramping up efforts to upgrade its heat pump products, which could reduce 60 to 80 percent of carbon emissions compared with coal-fired boilers so as to address the natural gas shortage in Europe.

According to Cinda Securities, with strong demand arising from European consumers, and given the commercial and industrial use of heat pumps, demand for heat pumps in the European market is expected to exceed 40 million units in the future, with the total market scale surpassing 400 billion euros ($387 billion).