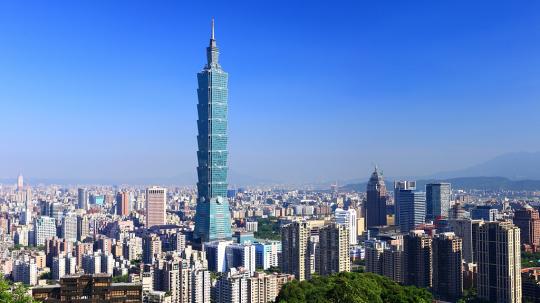 The Taipei 101 skyscraper commands the urban landscape in Taipei, Taiwan.(Photo/Xinhua)

Former U.S. secretary of state Mike Pompeo urged the United States to end its "blind engagement" with China if it does not want to see Beijing's dream of a "Chinese century" realized while speaking at a forum in Kaohsiung, China's Taiwan island, on Tuesday.

He also said that he was "greatly concerned" about the confusion caused by U.S. President Joe Biden over Washington's stance in the event of an "attack" on the island by the Chinese mainland.

But as Wang Wenbin, spokesperson for the Chinese Foreign Ministry, pointed out on the same day, responding to a question on Pompeo's second visit to the island in half a year, he is a U.S. politician whose credibility has been bankrupted, and he is working for personal gains.

Reportedly, he made $150,000 from his three-day visit to the island in March. He is apparently taking advantage of the Taiwan question to make personal gains, both financially and politically.

Although he spoke at a business forum, his purpose was obvious as he wants to pour oil on the flames of the most sensitive issue of the Sino-U.S. relations by spurring the U.S. to go further in the direction of unilaterally changing the status quo of the Taiwan Straits.

Pompeo's visit comes before the midterm elections in the U.S. as well as the local elections in Taiwan that will be held at the end of the year. By endorsing each other the two sides are scratching each other's back. The secession-seeking Democratic Progressive Party would like to show the voters on the island that it has strong U.S. support, and Pompeo, as a Republican politician, intends to use the visit to criticize the "softness" of the Biden administration and the Democrats to win the support of voters at home.

As some on the island have pointed out, the DPP administration has dramatically increased the budget for treating "distinguished foreign guests" in Taiwan, which is simply using Taiwan taxpayers' money for the DPP's narrow ends.