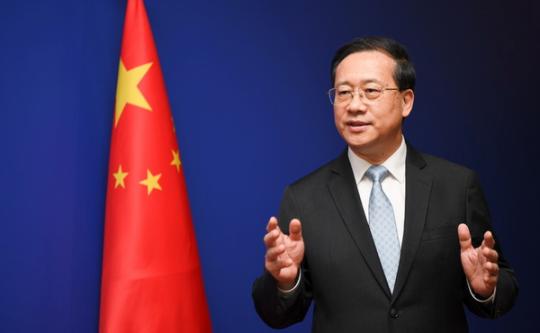 No one should expect China to swallow the bitter fruit of witnessing its national interests being undermined by others, a senior Chinese diplomat said on Thursday, adding that Chinese diplomats will continue to be devoted guardians of the interests of the country and people.

"What we want to tell the world is that the era when the Chinese nation is bullied by others is long gone and no force can hold back China's development," Vice-Foreign Minister Ma Zhaoxu said at a news conference in Beijing on China's diplomatic work.

It was the latest of a series of news conferences held by the Publicity Department of the Communist Party of China Central Committee to review achievements made by the Party in various fields over the past decade, ahead of the CPC's 20th National Congress, which is proposed to be convened in Beijing on Oct 16.

Ma said that since the 18th CPC National Congress, China has firmly defended its national interests and dignity on matters of principle and left no room for concessions on issues related to Taiwan, Hong Kong, Xinjiang, Tibet, the South China Sea and human rights.

He noted that, for seven times in a row, anti-China moves have been defeated at the UN Human Rights Council and the Third Committee of the UN General Assembly, and over 100 countries have supported China's just positions and expressed their opposition to using human rights as a pretext to interfere in China's domestic affairs.

"What we oppose is hegemony and bullying. What we stand for is international fairness and justice," he said.

Ma added that China is also making efforts to promote the reform of the global governance system in order to make it fairer and more reasonable, instead of "setting up a separate kitchen" as falsely claimed by some.

"No matter how the international landscape changes, China's actions to advance multilateral cooperation remain unchanged," he said, noting that China has formed a network of partnerships covering the entire world, and diplomatic relations have been established with 181 countries to date.

Guo Yezhou, vice-minister of the International Department of the CPC Central Committee, who also attended the news conference on Thursday, said the Party has been working steadfastly to strengthen a global partnership network of political parties over the past decade.

"The CPC maintains contacts of various forms with more than 600 political parties and organizations worldwide," he said.

According to Guo, in the wake of the visit by United States House Speaker Nancy Pelosi to the Taiwan region, more than 500 political parties, think tanks and social organizations from 150 countries expressed their firm support for the one-China principle.

"The purpose of our efforts to carry out dialogues and communications with foreign political parties is to improve our respective governance abilities in order to jointly promote the efficiency of global governance," he said.