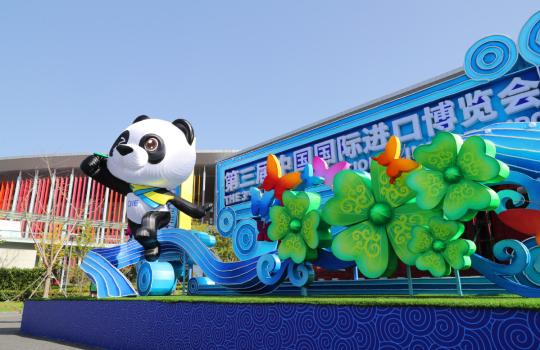 The photo taken on Oct 23 shows Jinbao, mascot of China International Import Expo, welcoming guests from around the world in Shanghai. (Photo/Xinhua)

Global automobile design company Icono, headquartered in Italy, will attend the third CIIE for the first time this year. The company will demonstrate the two concept vehicles known as "Flying Shark" and Neo, a 3D-printed chassis for autonomous vehicles, and a disinfection robot, which can welcome guests and explain things.

Then Watergen decided to settle in Shanghai. This year, despite the pandemic, the company is doing very well in China, said Ivan Melnikov, president of Israel BIE Group China and Watergen's chief representative in China.

At the third CIIE, in addition to air water generators, BIE Group will also display an urban vertical farm project VerticalField. Next year, the group plans to introduce a nanomaterials project NanoSono for bacterial and viral infection prevention.

In addition to displaying products and promoting sales, Melnikov is also preparing to bring production and management capacity to China. They have found land to build an industrial park and localize the above-mentioned projects in Nanxun district, Huzhou, East China's Zhejiang province, with management headquarters located in Shanghai, said Melnikov.

From the inaugural to the third CIIE, many new friends from around the globe have become old friends. The CIIE has not only attracted leading global companies to settle in Lujiazui to expand their businesses, but also attracted a number of "new" foreign companies to invest in China, said Feng Ji, director of Economic Development Department of Lujiazui Administration Bureau.

Statistics show about thirty exhibitors' projects have landed in Lujiazui and the brands include La Encina, Watergen and Innobeauty, the report said.

As the world's first import-themed national-level exhibition, CIIE is an important platform for China to actively expand imports. Benefiting from the market demand brought by the CIIE, many foreign enterprises have shared China's development dividends and opportunities from its domestic circulation by establishing R&D centers as well as global or regional headquarters, and increasing investment in China.

Facing the huge impact of the COVID-19 pandemic and complicated international and domestic situations in 2020, China scientifically coordinated epidemic prevention and control along with economic and social development. This has effectively promoted the recovery of production and life, supported the steady recovery of China's economy, and injected impetus to facilitate the global industrial chain and supply chain.

China is currently accelerating the promotion of strategic emerging industries including the digital economy, intelligent manufacturing, life and health, and new materials, forming more new growth points, and improving the stability and modernization level of the industrial chain and supply chain. Many new advantages have been fostered to participate in international cooperation and competition in new circumstances. These all bring international enterprises more cooperation opportunities.

The International Monetary Fund projected China's economy will grow by 1.9 percent in 2020, making China the only major economy that will see positive growth this year, according to the World Economic Outlook report released on Oct 13.