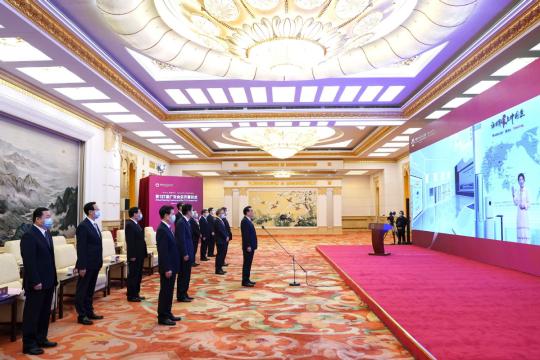 Premier Li Keqiang tours virtual pavilions of the 127th session of the China Import and Export Fair in Guangzhou, Guangdong province, via video link from Beijing on Monday after opening the fair. The event is also known as the Canton Fair. (FENG YONGBIN/CHINA DAILY）

The 127th session of the China Import and Export Fair, the first digital fair in its 63-year history, will help stabilize global supply and industrial chains amid uncertainties in global trade affected by COVID-19, government officials said on Monday.

The twice-yearly event, also known as the Canton Fair, opened online on Monday and will continue through June 24 in Guangzhou, Guangdong province. It has drawn a warm response from foreign customers willing to engage with Chinese suppliers despite the pandemic, which has slowed global trade and many countries' economic growth, said Li Jinqi, deputy director-general of the fair's organizing committee.

The fair, including 50 exhibition areas based on 16 categories of commodities, will attract some 25,000 Chinese export-oriented companies this month, organizers said. They will showcase 1.8 million products and services through various media such as photos, videos and 3D formats to promote matchmaking among suppliers and purchasers and conduct 24-hour business negotiations.

Foreign buyers can register on the 24-hour livestreaming platform and start purchase negotiations at any time during the exhibition period, as all companies have been exempted from paying exhibition fees in order to bolster international trade and yield win-win results.

Gu Jin, deputy general manager of the overseas business department at China General Technology Group, a State-owned machinery exporter, said the company doesn't have limitations in time or location when showing its products and services this time.

"We were only able to show certain small pieces of equipment in previous fairs due to the booth size," sad Gu. "But now we can display large machinery on the digital platform and show the production process and technologies online, not just the products themselves."

Premier Li Keqiang pledged continuous efforts to boost import facilitation and help businesses from various countries share China's vast market opportunities as he announced the opening of the 127th China Import and Export Fair at a virtual ceremony on Monday.

Speaking with business leaders via video link from Beijing, Li said China will bolster imports of products that sell well in the domestic market and work together with different countries to contribute to the global economic recovery.

China's decision to host the event online is an indicator of the country's firm resolve to expand opening-up and safeguard the security of international industry and supply chains, he said.

He called on businesses to improve the quality of their products and boost their competitiveness in the international market.

While many trade events around the world have been canceled or delayed and foreign buyers have been reluctant to travel abroad due to the pandemic, they have expressed eagerness to participate in the online Canton Fair as it offers a convenient way to help them resume production and services, said Zhang Li, deputy director-general of the department of foreign trade under the Ministry of Commerce.

Because of the pandemic, the World Trade Organization expects this year's global trade to fall by 13 percent to 32 percent. The coronavirus is also taking a toll on the world's second-largest economy, as the country's foreign trade in goods dropped by 4.9 percent year-on-year to 11.54 trillion yuan ($1.63 trillion) in the first five months of this year, Customs officials said.

Michael Schumann, chairman of the board of directors of Berlin-based Federal Association for Economic Development and Foreign Trade, said despite the decisive role the exhibition industry played in both countries, German industry is facing severe challenges from the pandemic and many large exhibitions in Germany have been canceled or postponed.