Chinese enterprises in Michigan forge ahead under U.S. tariffs

More than 300 Chinese enterprises and companies in the Midwestern U.S. state of Michigan are facing a common challenge: the high import tariffs pushed up by the U.S.-initiated trade war with China, together with the ensuing uncertainties that linger on. Some of the companies have been downsized or halted investment, while others continue to plan ahead, believing a favorable situation will return.

In the state widely known as the center of the U.S. automotive industry, most of the Chinese commercial and manufacturing entities earn their bread by functioning as part of the chain of car manufacturing. They have established a foothold in the past three decades, and are faced with an unprecedented threshold which demands enough wisdom and patience to surpass. 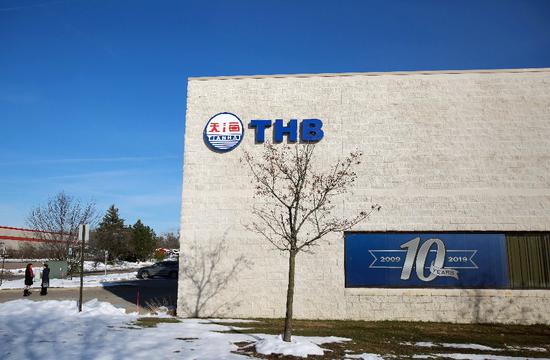 Photo taken on Nov. 17, 2019 shows the building of Tianhai Electric North America in the suburb area of Detroit, the United States. (Xinhua/Wang Ping)

U.S.-China relations are going through a difficult time, which he thinks will last some time, said Bill Zhuang, president and CEO of Tianhai Electric North America, the overseas branch of THB Group, China's top supplier of electronic connectors for automobile production.

"However, what we (can) do right now is to prepare for the day when the displeasure is over. I believe it will be," Zhuang said.

PREPARE FOR THE WORST

Zhuang avoided talking much about the impact of the U.S.-China trade dispute on his business, which has prospered for a decade with an annual revenue close to 200 million U.S. dollars. He would rather emphasize that opportunities arise from hardship, and one should not be frightened by the volatility and lengthiness of the dispute, but instead cash in on this peculiar period to accomplish what is hard to do at the usual time.

"The more difficult the time is, the better the chances will be," said Zhuang, who studied mathematics, computer information science and business management in the United States before becoming a professional executive. Tianhai Electric North America now has over 1,200 employees and churns out one third of the total revenue of its parent company based in central China's Henan Province.

If the tides are ferocious on the market or the political-economic environment is not of help, an enterprise has good chances to consider a merger because the prices are agreeable, or to hire more talents to build up its team to get prepared for the better time to come, he said.

The U.S. automotive industry heavily relies on imported materials and auto parts. Tianhai Electric has striven to remain cohesive in the global supply chain, devoted to maintaining close ties with three major U.S. automobile manufacturers -- General Motors, Ford and Chrysler. Their headquarters are all based in the Detroit metropolitan area.

"We now have this headquarters in Detroit and two plants in Mexico. Besides regular business, we are committed to alloying the high technology of the West Coast and the manufacturing power of the other parts of the United States, with our exceedingly strong connecting force," said Zhuang.

Meanwhile, Tianhai Electric is eyeing the European market as its next source of profit. "In the upcoming five years, we aim not only to double our revenues, but to secure a two to three-fold growth," he added.