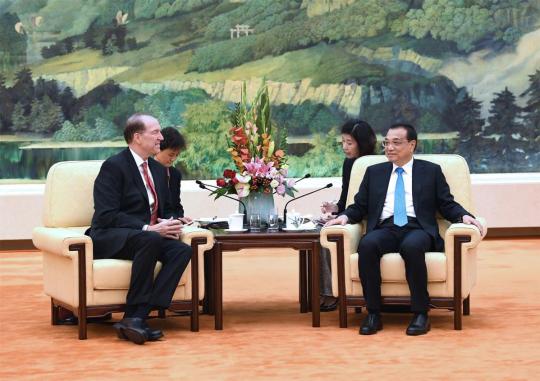 In talks with World Bank President David Malpass in Beijing, Li said China is willing to deepen win-win cooperation with different parties amid a complex and challenging international landscape with major economies in the world facing slowdowns.

"It is high time that we stick together with a sense of solidarity to emerge from these difficulties," Li said in his opening remarks.

The Chinese economy is deeply integrated with the world, and the country is furthering reform and expanding opening-up, he added.

Li reaffirmed the country's commitment to accelerating the fostering of a business environment that is in keeping with market principles, the rule of law and international standards to further stimulate market vitality.

The premier voiced his appreciation to the World Bank's World Development Report 2020, which he said recognized the value of the rules-based global trading system.

China is willing to step up bilateral cooperation with the World Bank via funding and knowledge channels, and deepen cooperation in key areas including environmental protection, biological diversity and poverty reduction, he said.

The nation will fulfill its responsibilities as a major developing country and jointly promote the course of global development, Li added.

Malpass, who is in Beijing to attend the "1 6" Round Table Dialogue on Thursday, said joint efforts from different parties are required to address the daunting challenges faced by the global economy.

There is still enormous potential in China's economic growth, and the country's opening-up has also seen remarkable achievements, Malpass said.

He also voiced a willingness by the World Bank to step up cooperation with China in boosting growth, coping with an aging society, achieving innovation in science and technology and enhancing environmental protection.