Tears won't help, they must face the music 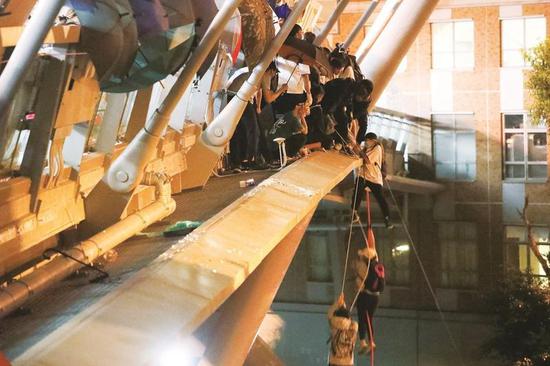 Ripples of depression swiftly descended on hundreds of young protesters who were cooped up on the campus of Hong Kong Polytechnic University in the wee hours of Tuesday after they realized the hard truth — the police had surrounded the entire campus, and there was virtually little chance for them to escape.

Some students sobbed, some had their faces deeply buried in their hands.

The 22 hours on the campus from Monday evening to Tuesday afternoon were the most chaotic and dramatic I’ve gone through as a photographer.

Before the gloom spread, there had been bitter spats among the radicals. Some had tried hard to convince fellow protesters to stick to their guns and, if possible, blast their way out of the university with gasoline bombs, and bows and arrows, while others believed it would be better to stay.

A protester, who had earlier failed to charge through police lines, burst into tears, shouting: “Why don't the police give us a way out?”

My emotions were stirred up by the bleak atmosphere and the tears that flowed. But I realized it was too late.

On Monday, the police had made an urgent appeal to those still holding out inside the campus to drop their arms, including dangerous weapons, and leave peacefully and orderly via a designated route under police instructions. They also warned that anyone who remained on the campus after 10 pm would be arrested and charged with rioting. The maximum punishment for rioting is 10 years’ imprisonment.

Those who wept might have felt frustrated, or were scared or remorseful, but tears and remorse couldn’t change their inevitable fate — they cannot leave and go home without being arrested and, possibly, facing the full wrath of the law.

In a civilized society like Hong Kong that upholds the rule of law, everyone would have to be liable for his or her wrongdoing, and nobody can be above the law.

I think some of the protesters might have never thought of the price they would have to pay, or how dangerous the situation they might find themselves in by resorting to violence and illegal activities.

On Monday evening, when I saw large groups of protesters rappelling down a 6-meter-high footbridge in a frantic bid to flee, and some of them coming down with a big thud, I became so nervous and worried that I found it difficult to hold on to my camera with my trembling hands.

Most protesters I met at PolyU are young, like students in their 20s. Having to bear responsibility for what they have done may be a lesson these young people should and have learned from the siege.

How the community, including educators, teachers and parents, can help these young people keep the red line of the law in mind, and how Hong Kong can safeguard and restore the rule of law, is an issue that all stakeholders in the city should give serious thought to.