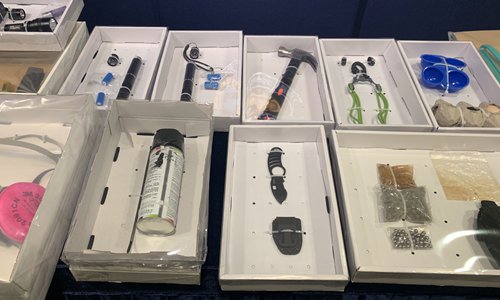 Weapons seized by police from illegal protesters on Sunday, including a dagger and hammer, are shown at the headquarters of the Hong Kong police on Monday. (Photo: Chen Qingqing/GT)

According to some shopkeepers and tradesmen from the Chinese mainland reached by the Global Times on Sunday, they stopped taking orders from Hong Kong since about the end of July, when peaceful demonstrations in the region against the Hong Kong government's amendments to an extradition bill turned into secessionist riots.

A laser pen seller based in Hangzhou, East China's Zhejiang Province, on Taobao told the Global Times that they would not sell laser pens to Hong Kong rioters to indulge their violent and secessionist acts, which triggered outrage on Chinese social media.

Posts on China's Twitter-like Sina Weibo showed that some sellers had stopped bulk sales to Hong Kong and Guangzhou, capital of South China's Guangdong Province, to avoid these goods being used in escalating rallies in Hong Kong. "Selling laser pens to Hong Kong rioters would make me a traitor to the country, a seller said in a post circulating on Weibo.

Black T-shirts, masks and yellow helmets are essential equipment used by violent anti-government protesters, who have blocked roads and paralyzed the city. Laser pens have been reportedly used by mobs in Hong Kong to flash lasers at police officers faces and hurt several of them.

According to a press conference by Hong Kong police on August 7, some high-powered laser pens can cause blindness if pointed at the eyes for no more than one second.

The press conference came one day after the Hong Kong police arrested Fong Chung-yin, a student leader from Hong Kong Baptist University, for possessing ten offensive weapons after finding he had ten laser pens and guns that can beam laser lights of 100 milliwatts.

China currently lacks special laws on the trade and possession of high-powered laser pens. But the Global Times reporter learned that in the UK and U.S., laser pens used as pointers are limited to 1 and 5 milliwatts. Some states in the U.S. have specific laws banning pointing lasers at law enforcement officers and government officials.