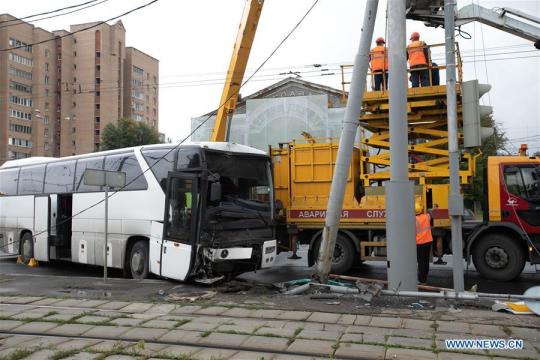 A bus carrying a group of 30 Chinese tourists, a tour guide and an organizer, crashed into a utility pole in east Moscow on Sunday, injuring 11 people, Russian police told Chinese consular officials.

The injured have been taken to the hospital for medical check-ups. One suffered a nasal fracture and one received a cerebral concussion, while the rest got bruises, according to the Chinese consular service.

The injured did not fasten their seat belts when the accident took place, which was partially caused by the slippery road in the drizzle, it said.

The bus was bound for the ancient town of Suzdal in the Vladimir Region northeast of Moscow. The group of tourists arrived in Moscow on Saturday and planned to fly back to China from St. Petersburg on Aug. 23.