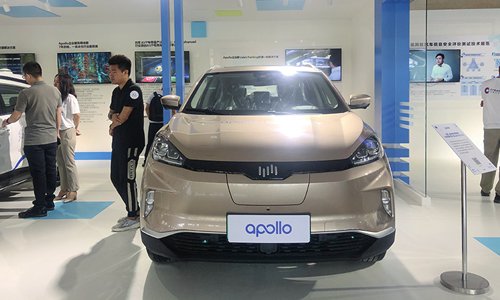 A car that runs Baidu's autonomous driving Platform Apollo is on exhibition at the site of Baidu Create 2019 on Wednesday in Beijing. (Photo: Huang Ge/GT)

Baidu and Huawei on Wednesday announced partnership to explore the artificial intelligence (AI) sector, and analysts said the tie-up between the Chinese technology giants will help build a core technology base to power the domestic AI industry.

Baidu's open source deep-learning platform PaddlePaddle will cooperate with Huawei Kirin, aiming to create a learning platform based on domestically developed chipsets, the companies announced at the opening of Baidu's annual AI conference in Beijing.

The companies will make good use of the advantages of the combination between software and hardware to develop more AI applications, aiming at advancing the intelligent development of Chinese industries, Wang Chenglu, President of Huawei Consumer Business Group software division, told the conference.

Industry insiders said the cooperation will be a powerful combination - Baidu's software has increased advantages while Huawei excels in hardware.

The tie-up will support the fast growth of the Chinese AI industry and offer a feasible way for domestic companies to advance the sector, they said.

Baidu is also aiming to forge its own chipset after it launched its first AI chip named Kunlun in 2018. On Wednesday, Baidu unveiled an AI chip, Honghu, which will be applied in sectors such as vehicle-mounted voice systems.

"I'm quite surprised by Baidu's AI show, such as the Honghu chip, as I thought it was Huawei's task to produce chipsets. Never expected that Baidu will also catch up," said a Beijing-based IT industry insider on condition of anonymity, speaking to the Global Times on the sidelines of the conference.

"Also Baidu's autonomous driving platform Apollo is very impressive because it has mastered an autonomous parking function, which Baidu Chairman and CEO Robin Li Yanhong said 'aimed to offer the freedom of the last mile for drivers', " he said.

Addressing more than 7,000 developers at the conference, Li explained how the company had applied AI to accelerate the intelligent transformation of various industries, including transportation, financial services and healthcare, in the previous year.

The meaning of the existence of technology is to make the world better, Li said. "Many difficulties lie ahead on the road to advance AI, but Baidu is determined."

Dong noted that although U.S. companies like Facebook and Google have their own hardware, most of those products are not made in the local markets.

Given that the U.S. government imposed pressure on some Chinese technology companies, Baidu will further pursue cooperation with domestic enterprises while pursuing international cooperation, including with U.S.-based companies, Dong said.

At the conference, the company and Intel announced a partnership to work together on Intel's new Nervana Neural Network Processor for training.

As China officially entered the 5G era when it released 5G licenses to major carriers in June, it created broader prospects for the development of the country's AI industry.