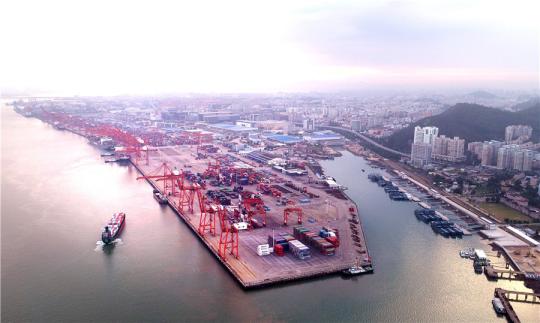 A cargo ship approaches the wharf in the pilot FTZ in Xiamen, Fujian province. (Photo by Jiang Kehong/Xinhua)

Zhong Muda, deputy head of the Department of Commerce of Fujian Province, said China (Fujian) Pilot Free Trade Zone is going to attract investment and strengthen trade ties with other countries, thanks to the area's work in enhancing its business environment.

"Although Fujian's pilot FTZ takes up less than 1/1,000 of the province's total space, it has attracted nearly half of Fujian's newly established businesses with capitals from Taiwan and overseas, within four years since the pilot FTZ started operations," said Zhong.

To date, Fujian's pilot FTZ has attracted 3,891 Taiwan-based and foreign companies, among other world-leading enterprises, including ABB, Shell, and Amazon. Fujian's FTZ is now home to over 80,000 newly set up businesses, with registered capitals totaling 1.8 trillion yuan ($261.9 billion) from both domestic and overseas companies.

"Fujian's continuous efforts in infrastructure and policy have played an important role in incubating businesses in both traditional and emerging sectors," Zhong said.

According to Zhong, policymakers have taken consistent steps to promote a shortened procedure for business licensing approval. Business owners only go through two rounds of applications and wait for less than three days on average to get a license. In the past, they needed to go through seven rounds of applications, which took nearly 11 days on average.

"More measures have been rolled out to make customs clearance easier. Those include fewer documents and procedures required, and innovative mechanisms like export insurance services," Zhong said.

Zhou Minliang, an economist that specializes in regional economic development at the Institute of Industrial Economics of the Chinese Academy of Social Sciences, said Fujian's pilot FTZ is likely to become a new economic growth point among Chinese coastal cities, with its flourishing investment and trade with international markets.

"Fujian's pilot FTZ covers areas in capital city Fuzhou and economic hub Xiamen city. That helps create a synergistic effect for both cities' development. The tie-up will also help the FTZ become a coastal base of China's opening up."

According to Zhou, Fujian's pilot FTZ is likely to become an important bridge of economic communication between the Guangdong-Hong Kong-Macao Greater Bay Area and the Yangtze River Delta, two of China's major economic hubs.