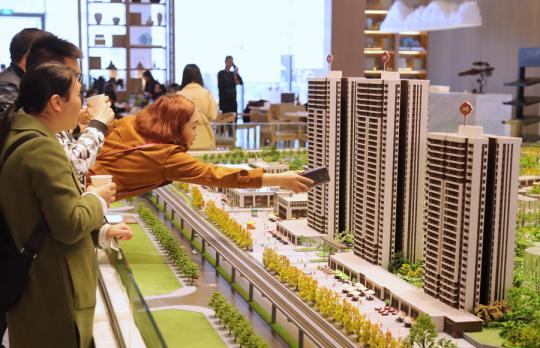 China's property development remains bullish this year despite tightening measures, and total real estate investment in the first 11 months has surpassed that of the whole of 2017, according to official data.

Investment in property development in the Chinese mainland's 31 provinces, municipalities and autonomous regions totaled 11 trillion yuan ($1.6 trillion) from January to November, exceeding the 10.98 trillion yuan of 2017, according to the National Bureau of Statistics (NBS) data.

The investment volume is impressive considering the tightening measures in the sector, because 405 property restrictions have been announced across the nation this year, up 80 percent from a year ago, according to a report published earlier this month by the Chinese Academy of Social Sciences.

"Amid the tightening environment, real estate developers did not lose their confidence, and their growth in investment is proof of both their resilience and the positive outlook of China's property market and the broad economy as a whole," said Chen Jie, a professor from Shanghai Jiao Tong University.

Property developers purchased 253.26 million square meters of land in the first 11 months, growing 14.3 percent year-on-year, and the total value of the land was 1.37 trillion yuan, up 20.2 percent from a year ago, according to the NBS data.

Zhang Dawei, chief analyst at Centaline Property Agency Ltd, said active land transactions are not limited to first and second-tier cities, but are also in third and fourth-tier cities.

The annual Central Economic Work Conference held in Beijing last week called for building a long-term mechanism to maintain the sound development of the real estate market and adhere to the principle that "housing is for living in, not speculation."

Analysts said that following the course set by China's top leadership for 2019, the real estate sector will see moderate investment growth in the coming year.

James Macdonald, head and senior director of Savills China Research, suggested there is expected to be further consolidation in the developer market in 2019, as larger developers with stronger cash flow and healthier balance sheets look to seize upon opportunities resulting from the market slowdown and tighter financing conditions.