Black Friday bonanza on the horizon 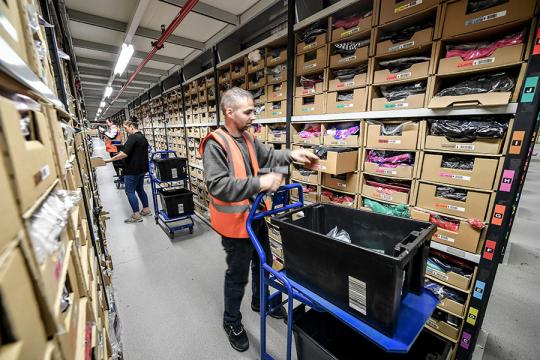 Cross-border e-commerce platforms are betting big on Black Friday, the U.S. shopping spree that starts after Thanksgiving, as more and more middle and high-income shoppers in China target high-quality goods from overseas.

U.S.-based tech giant Amazon.com Inc has kicked off its biggest-ever Black Friday promotion by offering more than 100,000 quality products, which cover thousands of international brands from Amazon's four overseas sites in the United States, the United Kingdom, Japan and Germany.

Chinese customers could enjoy the same discounts and deals on four overseas sites at the same time, with discounts up to 50 percent through Amazon Global Store, its first localized global e-store, the company said.

Black Friday, the start of the Christmas shopping season, is a manic shopping day featuring the highest discounts all year round and is a bonanza for brick-and-mortar retailers, e-commerce players and consumers around the world.

An increasing number of Chinese consumers have participated in the global shopping festival, since Amazon China brought Black Friday to China in 2014.

Gu Fan, vice-president of Amazon China, expressed confidence about the upcoming Black Friday shopping spree, saying that maternal and infant products are favored by Chinese consumers, who are seeking highly authentic and high-quality products from all over the world.

Ymatou, a Shanghai-based cross-border e-commerce site, is providing a diversified shopping service during this year's Black Friday carnival. Chinese customers can use the site to buy more than one million imported goods with discounts from 83 countries.

The company said its sales revenue surpassed 100 million yuan ($14.4 million) in just 3 minutes 42 seconds when it started its Black Friday shopping carnival on Nov 16, a week earlier than the official start of the shopping season. Cosmetics, bags, clothes and accessories, shoes and food are the most popular items.

Zeng Bibo, founder and chief executive officer of Ymatou, said that along with the consumption upgrade, purchasing overseas products has become a habit for hundreds of millions of online shoppers. "Chinese consumers have a greater demand for diversified products and personalized services," Zeng added.

Ymatou is hiring more than 60,000 buyers living abroad as local agents to buy foreign products for customers in China. In the past year, the company has revised its entry rules for buyers several times and made random checks to ensure the quality and authenticity of products.

According to a survey conducted recently by Amazon China and market consultancy Data 100, more than 80 percent of those surveyed will shop on Black Friday, which makes it the most popular year-end shopping festival for cross-border online shoppers.

Over half of the respondents first became aware of the Black Friday shopping festival between 2014 and 2016. For this year's upcoming Black Friday, 70 percent of the interviewees plan to spend more than 2,000 yuan and 75 percent plan to shop through Amazon Global Store or Amazon's overseas websites.

Moreover, about 80 percent of the interviewees said they pay most attention to the quality of products and brand awareness.

Industry insiders said it is clear that demand for international brands is rising rapidly in China, and this is probably one of the fastest-growing trends in e-commerce. Imported, high-quality and famous brands are popular with consumers, and younger shoppers proved to be the main consumption force.

Chen Tao, an analyst with internet consultancy Analysys in Beijing, said: "E-commerce platforms hope to seize the opportunities emerging from the consumption upgrades of Chinese shoppers."

Market researcher eMarketer estimated that by 2020, a quarter of the Chinese population, or more than half of China's digital buyers, will be shopping for cross-border products, either directly on foreign-based websites or through third parties.