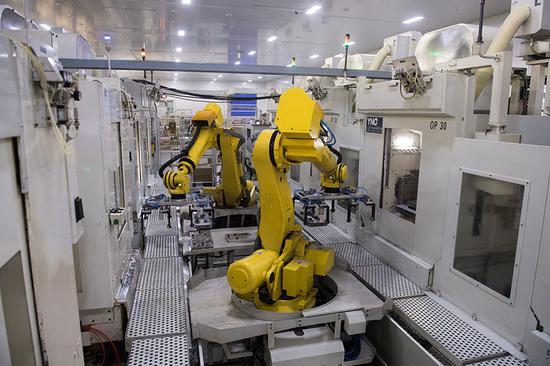 The report, released last Friday at the opening ceremony of the World Intelligent Manufacturing Summit in Nanjing, Jiangsu province, shows that China has been the world's largest industrial robot market for five consecutive years. In 2017, China produced over 130,000 industrial robots with a 68.1 percent year-on-year increase, accounting for one third of the global market.

"China's economy is moving from high-speed development to high-quality growth," Xin Guobin, vice-minister of industry and information technology, said during the opening ceremony. "We will continue to boost the healthy development of smart manufacturing, strengthen the construction of industrial internet and public service platforms, build the ability to protect data security, cultivate a group of talents good at both manufacturing technologies and the application of informatization."

Xin reiterated that the country's efforts have actually borne fruit in recent years, as the central and local governments have introduced a series of supportive policies to foster the initial smart manufacturing system. The nation has also made breakthroughs in key fields, built the initial standards and the industrial internet system structure, Xin said.

So far, the nation has built 208 digital workshops and smart factories and over 100 intelligent manufacturing standard test platforms, the report said.