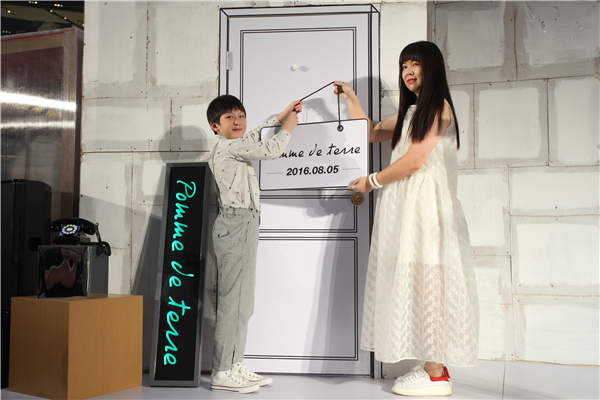 Zhu Yongrong, general manager of business unit for children's brands, and child star Zhu Jiayu at the opening of the brand's first store in Chengdu. Photos provided to China Daily

A major Chinese fashion label has recently launched a new brand called Pomme de terre to fill a void in the fashion scene.

Adolescence can be a difficult time for teenagers and their parents, but major Chinese fashion brand JNBY wants to make it fun on the clothing front.

JNBY has recently ventured into this space with a brand called Pomme de terre.

The brand debuted in Chengdu earlier this month with a fashion show and store opening.

Inspired by an imaginary male character called Pomme, the brand's motto is "Don't be serious", and its first collection highlights light colors and natural fabrics.

Li says she doesn't believe in market research before going into new ventures. Instead, she believes in the power of the heart.

"We don't do things for commercial reasons only. We do them for love.

"People have different feelings after they have kids," she says.

Li says that when she created jnby by JNBY she had her own children in mind.

Li, who has an 8-year-old daughter and a 6-year-old son, says: "I was looking for clothes that were easy to wear, easy to wash and affordable for children, but I couldn't find anything in the stores."

The daughter of a mathematics teacher, Li was born and raised in Hangzhou, capital of Zhejiang province.

She studied chemistry in Zhejiang University before working in a small chemical company for two years. She later left the company to pursue her passion for fashion, first doing apparel trading and then founding JNBY in 1994.

The brand soon made a name for itself with its artsy, minimalist style and natural, innovative fabrics, a reflection of Li's interest in both fashion and art in general.

A modern art collector, Li is a regular visitor to arts districts in Beijing like Caochangdi and 798.

Meanwhile, the company has expanded from womenswear into menswear. It also has a furniture brand called Beilunji.

Li says that she plans to make Beilunji a platform for designers who want to promote their work.

"Every time I start a brand, I make sure that it offers something new. Otherwise, I lose interest," she says.

Li created the casual menswear brand Croquis in 2005 when Chinese menswear brands were either formal or athletic. And jnby by JNBY was created in 2011 when vibrant colors and cartoons were mainstream for children.

As of now, eastern and northern China make JNBY's largest market, accounting for about 50 percent of the company's total sales.

JNBY, which now has 29 overseas stores－in Japan, Singapore, Canada and Thailand, took part in Tokyo Fashion Week in 2012 with its 2013 spring/summer collection.

In 2011, JNBY was listed by Forbes China as one of the six Chinese brands most likely to go international.

Meanwhile, media reports say JNBY Group is expected to launch an initial public offering of its shares in Hong Kong later this year, although Li would not reveal any details about it.