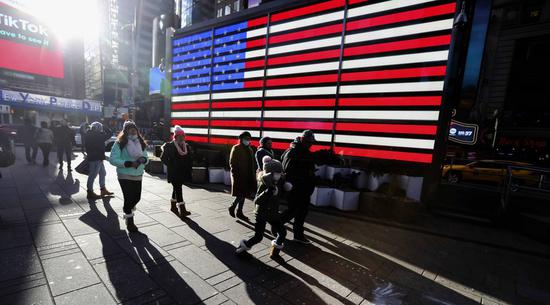 "It's very troubling in this divided nation," said Lindsay Cui, after watching a 90-minute NBC News program on the state of the U.S.

"Everyone just stays in their own silos, and not even have common grounds," said Cui, a financial adviser in Silicon Valley. "Now the Democrats and Republicans don't even agree on fundamental facts. News is skewed and twisted by right-wing podcast reporting opinions vs facts," she said.

Her disappointment on the current state echoes a poll that found many Americans have a pessimistic outlook on the status of democracy in the country and less than half are confident that results of next month's midterm elections will be counted accurately.

According to the poll of 1,129 adults surveyed Oct 6-10 and released Wednesday by The Associated Press-NORC Center for Public Affairs Research, about half of the respondents feel U.S. democracy is working poorly and 1 in 10 think it is working well.

The poll also found 37 percent said U.S. democracy functioned "somewhat well", and 52 percent said they believed the country's democracy was working "not at all" or "not too well".

It shows 47 percent of Americans say they have "a great deal" or "quite a bit" of confidence that the votes in the midterm elections will be tallied accurately.

Cui said former president Donald Trump "is a product of how we got here". "Look at the number of candidates on the ballots in November's elections, they just scream election fraud and still deny Biden won," she told China Daily.

Despite partisan differences when it comes to vote-counting and the state of democracy in the United States, Republicans and Democrats both have negative outlooks about how leaders are chosen under the political system, according to the poll.

Polls have recently favored Republicans as concerns over the economy are increasing. A New York Times/Siena College poll released on Oct 17 found voters favor Republican control of Congress by a margin of 4 percentage points.

The share of likely voters who said economic concerns were the most important issues facing America has increased to 44 percent from 36 percent in July. And voters most concerned with the economy favored Republicans overwhelmingly, by more than a two-to-one margin, according to the poll.

The poll also showed that 45 percent of likely voters strongly disapproved of the job that President Joe Biden was doing, and 90 percent of those voters planned to back a Republican for Congress.

The survey showed that Republicans scored higher on voter preference for economic issues, with double-digit leads on the questions of who would do a better job bringing down inflation, handling taxes, dealing with deficits and creating jobs.

After a divisive presidential election nearly two years ago, and claims of widespread fraud by Republicans as well as an attack on the U.S. Capitol, observers said democracy in the U.S. is declining.

The Stockholm-based International Institute for Democracy and Electoral Assistance labeled the U.S. a "backsliding democracy" in a report last year. A historic turning point came when Trump questioned the results of the 2020 elections, according to the report.

U.S. democracy is at "a dangerous inflection point", according to a September report by the Carnegie Endowment for International Peace. The country's democratic decline has been accelerated despite record numbers of people, minorities and swing voters voting, said the report.

It is especially difficult to see U.S. democracy in decline as the country always bills itself as the champion of democracy around the world, said Cyrus Janssen, a U.S. video blogger who has lived in China for a decade and in Canada for the last five years.

"Being back in the U.S. for a month, I can honestly say, I've never seen the country so divided as I've seen right now," said Janssen in a YouTube episode last month.

He described the acceleration of the decline as a snowball going down the side of a mountain: "It's just getting bigger and bigger and gaining more snow and going faster and faster."

The democratic process has been corrupted by money, said Janssen. "Several years ago, when you ran a campaign, money was very much involved in American politics. But now it's magnified to the next level, and there's just so much blatant corruption and manipulation," he said. "I think many Americans are so frustrated with how this democracy is going and the lack of options and choices."