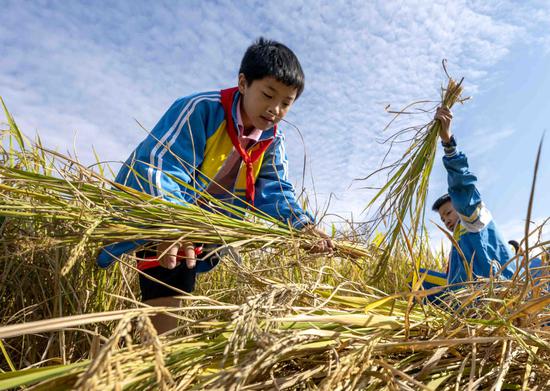 China's National Grain Security Publicity Week kicked off online on Monday and will run through World Food Day, which falls on Sunday, according to the National Food and Strategic Reserves Administration.

Events publicizing China's achievements in safeguarding national food security and the country's active participation in international cooperation will be held during the week.

Effective methods used to reduce food loss during grain production will also be promoted, according to the administration, which is one of the major hosts.

Local authorities are urged to launch a series of educational activities such as knowledge contests and online seminars related to grain security to increase public awareness.

Referential cases related to ensuring grain security nationwide will be summarized and promoted.

Given the ongoing pandemic, military conflicts, climate change and rising prices that affect global food security, the theme of this year's World Food Day is "Leave no one behind for better production, better nutrition, a better environment and a better life".

"We have every reason to believe that China has the full capacity to ensure national food supply and to make sure that the rice bowl is held firmly in the hands of the Chinese people," Watson said.

He said he expects the nation to continue to play a bigger role in contributing to world food security.

"Through South-South cooperation, we would like to share the experiences and successful practices of China, providing examples for agricultural and rural development in developing countries," Qu said.