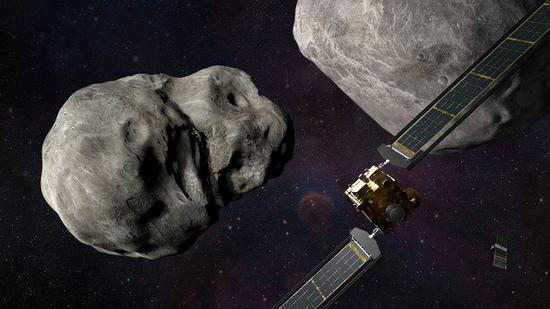 NASA's Double Asteroid Redirection Test (DART) mission has successfully changed the orbit of the asteroid Dimorphos when the NASA spacecraft intentionally slammed into the space rock, the agency said on Tuesday.

Prior to DART's impact, it took Dimorphos 11 hours and 55 minutes to orbit its larger parent asteroid, Didymos.

Since DART's intentional collision with Dimorphos on Sept. 26, astronomers have been using telescopes on Earth to measure how much that time has changed.

Now, the investigation team has confirmed the spacecraft's impact altered Dimorphos' orbit around Didymos by 32 minutes, shortening the 11 hour and 55-minute orbit to 11 hours and 23 minutes, said NASA.

The DART mission aims to shift an asteroid's orbit through kinetic impact, in order to test and validate a method to protect Earth in case of an asteroid impact threat, according to NASA.

The DART spacecraft was launched on Nov. 24, 2021, and spent 10 months journeying to its asteroid target.