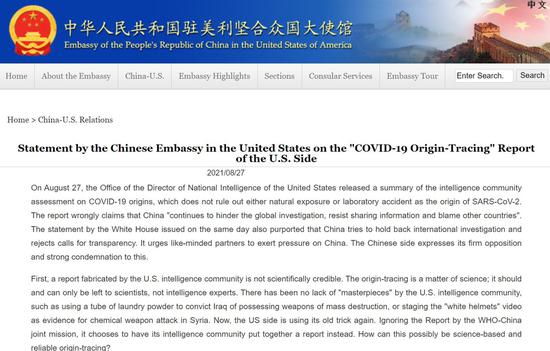 China is firmly opposed to the report released by the U.S. intelligence community on COVID-19 origins tracing, which accused China of "obstructing international investigations" and "refusing to share information and blaming other countries," the Chinese Embassy in the United States said in a statement on Saturday.

The report is a fabrication led by the U.S. intelligence community and has no scientific basis or credibility at all, the statement said, adding that tracing the COVID-19 virus is a complex scientific matter, which should only be studied by scientists, not intelligence experts.

A fabrication with no credibility

The report is a fabrication led by the U.S. intelligence community and has no scientific basis or credibility at all, the statement said, adding that tracing the COVID-19 virus is a complex scientific matter that should only be done by scientists, not intelligence experts.

The embassy pointed out that the U.S. is now using its old trick again while ignoring the Report by the WHO-China joint mission and choosing to have its intelligence community put together a report instead. "How can this possibly be science-based and reliable origin-tracing?"

An excuse for smearing China

The assertion of a lack of transparency on the part of China is only an excuse for a U.S. politicizing and stigmatizing campaign, the statement read.

It reiterated that China has taken an open, transparent and responsible attitude since the outbreak of COVID-19, adding that it has released information, shared the genome sequencing of the virus, and carried out international cooperation to fight the disease, all done at the earliest possible time.

In terms of COVID-19 origins tracing, the Chinese embassy stressed, China has followed a science-based, professional, serious and responsible approach and the openness and transparency China has displayed has won full recognition from international experts.

"We are the first to cooperate with the WHO on global origin-tracing, and we have invited WHO experts to conduct the investigations twice in China. We were completely open, transparent and cooperative when the experts were in China. They visited every site on their list, met every individual they asked for, and were provided with all the data they wanted."

The statement also noted the formulation of the Report of the WHO-China joint mission followed WHO procedures and adopted a scientific approach that is authoritative and science-based.

The report by the U.S. intelligence community shows that the U.S. is bent on going down the wrong path of political manipulation, the embassy said.

Stressing the U.S. has registered the world's most COVID-19 infections and deaths, the statement said the report is based on a presumption of guilt on the part of China, and it is only for scapegoating the country.

"Such a practice will only disturb and sabotage international cooperation on origin-tracing and on fighting the pandemic, and has been widely opposed by the international community," the embassy warned.

It added over 300 political parties, social organizations and think tanks from more than 100 countries and regions have submitted a joint statement to the WHO Secretariat, firmly opposing the politicizing the origins tracing.

U.S. shying away from origins tracing

The embassy accused the U.S. of shying away from tracing the origins. "If the U.S. side is 'transparent and responsible', it should make public and examine the data of its early cases."

The statement said in at least five American states, there had been infections before the first confirmed case in the U.S. was announced.

"The timeline of the outbreak in the United States has been revised to earlier dates several times," the statement read and cited the latest coverage from American media, saying the first COVID-19 death in the U.S. was in early January 2020, weeks earlier than previously announced by the authorities, which was early February.

The embassy reiterated that the WHO-China joint study reached the clear conclusion that introduction through a lab accident in Wuhan is "extremely unlikely."

"If the U.S. insists on the lab leak theory, isn't it necessary for the U.S. side to invite WHO experts to Fort Detrick and the University of North Carolina (UNC) for investigation?"

The embassy noted a disease with symptoms similar to COVID-19 broke out in the U.S after Fort Detrick's shutdown in 2019 because of serious safety incidents, adding that the team of Professor Ralph Baric at the UNC possesses extremely mature capability in synthesizing and modifying coronavirus.

The embassy urged the U.S. to find out what happened in its own labs first rather than "keeping slinging mud at others."

The statement said any Phase II origins study must be a comprehensive extension of Phase I and conducted in multiple places and countries to find out the truth.

The Chinese embassy also told the U.S. side that "continuing such an effort will also be in vain, because its subject is simply non-existent and anti-science."