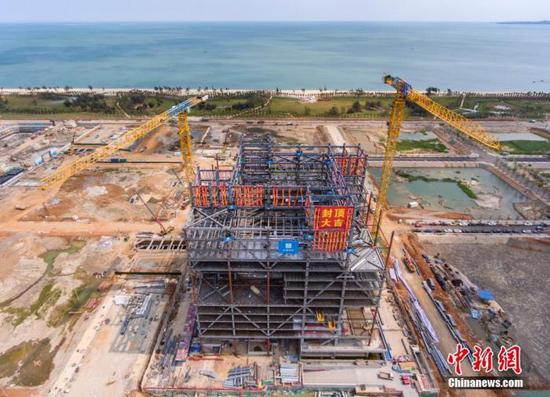 ECNS -- Stellar growth in foreign investment at Hainan Free Trade Port (FTP) over the past three years has made the island province a new focus for global capital, according to a press statement on the progress of the HainanFTP policy on Monday.

Foreign capital utilization in Hainan has doubled for three consecutive years, with the total amount exceeding more than half the figure since the Hainan Special Economic Zone was established 30 years ago. The number of newly-set foreign-invested enterprises in 2020 has grown to 1,005, threefold that of 2019. Sources of foreign capital also doubled, with 80 countries and regions investing in Hainan.

Preferential policies are behind the global investment boom in Hainan.The province has the shortest negative list for foreign investment, 27 items, compared to 33 at national level and 30 at free trade zone level.

Enterprises registered in Hainan have the lowest tax burden. For example, encouraged industries and enterprises registered in Hainan could be taxed at a reduced corporate income tax rate of 15 percent, while individual income tax in excess of 15 percent of their actual tax burden could be waived for high-end and urgently needed talent working in the FTP. Both preferential policies are unprecedented in China.

The island's offshore duty-free sales are likely to exceed 60 billion yuan (about $9.15 billion) in 2021, up from 30 billion yuan last year, as fine-tuned favorable policies continue to draw more consumers, according to the press conference on Monday.

In addition, a dedicated channel for international Internet data was officially opened in Hainan FTP on April 12 to improve communication infrastructure.

It will help promote the development of the FTP integrating tourism and health care, port logistics, the pharmaceutical industry, Internet, cross-border e-commerce and other industries.