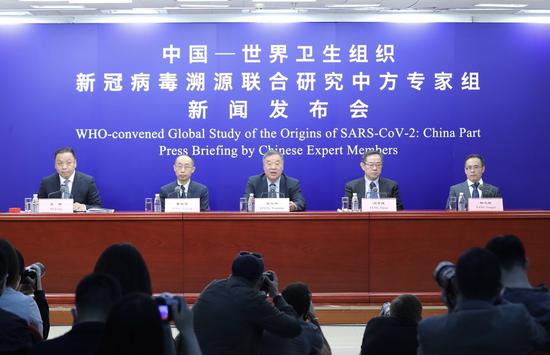 Chinese expert members of a WHO-China joint team introduce the report on the WHO-convened global study of COVID-19 origins at a press briefing in Beijing, capital of China, March 31, 2021. (Xinhua/Zhang Yuwei)

Political manipulations on COVID-19 origin tracing are as deadly as the virus as they damage the two most needed elements in the arduous anti-pandemic fight -- global solidarity and scientific spirit.

Some Western media have published two open letters recently denying the conclusion of the World Health Organization (WHO) experts on COVID-19 origin tracing research, dealing another baseless attack on China.

Smearing China-WHO cooperation and spreading ill-motivated assumptions, the letters are full of fallacies, which are in essence political manipulations with a sinister intention and should be alerted against.

Mainly drafted by people without medical or other scientific backgrounds like Jamie Metzl, a former member of the White House National Security Council, both letters despicably call the joint study of WHO and China an "investigation" with a presumption of guilt.

On March 30, after a field study in China's central city of Wuhan by a group of international experts, the WHO issued a report saying animals probably transmitted the novel coronavirus to human beings in two scenarios, yet the tracing of the virus's origin remains underway.

Through their scientific research on the virus's origin, Chinese and WHO experts have expanded humanity's knowledge in this regard.

However, just because the results practically denied the unfounded speculation that the pandemic was caused by a leak from a lab in Wuhan, making the pedlars of conspiracy theories disappointed, the latest so-called open letter challenged the scientists' integrity by disregarding the fact that the members of the international expert group participating in the field study were widely representative and scientifically independent.

The timing of the two letters, with the first published before the release of the WHO report and the second after, was hardly a coincidence.

Actually, such manipulations are just another clumsy ploy of those habitual China-bashers, who have been stubborn in seizing any chance to attack Beijing.

When the global health crisis caught the world off guard, they were so eager to blame Beijing that they totally ignored the WHO warning and thus missed the window to control the pandemic. When China started to cooperate with WHO on tracing the virus's origin, they still addicted themselves to criticizing China with groundless allegations.

Shamefully, acts like distorting facts, shifting blames, defying scientific results and smearing China's cooperation with WHO and other countries have distracted the global fight and disrupted international cooperation against the coronavirus.

China's contribution to the anti-pandemic fight is undeniable. Take the virus origin tracing effort as an example. Despite difficulties in epidemic prevention and control at home, Beijing invited WHO experts to come to China twice for the endeavor.

Peter K. Ben Embarek, a food safety and zoonosis expert with the WHO and leader of the international team of experts to Wuhan, has openly said that all members of the team, including 17 foreign experts and 17 Chinese scientists, were able to reach consensus on all the issues about their conclusions in the WHO report.

Given the complexity and importance of the issue of coronavirus origin tracing, it is unacceptable and dangerous to tolerate the political manipulations of some pseudo scientists.

To some extent, such acts are as deadly as the virus as they damage the two most needed elements in the arduous anti-pandemic fight -- global solidarity and scientific spirit.

As the effort in origin tracing of the virus still needs more countries' contribution, the world should be wary of such sinister political manipulations. Otherwise, the nearly 3 million people lost to COVID-19 would have died in vain.