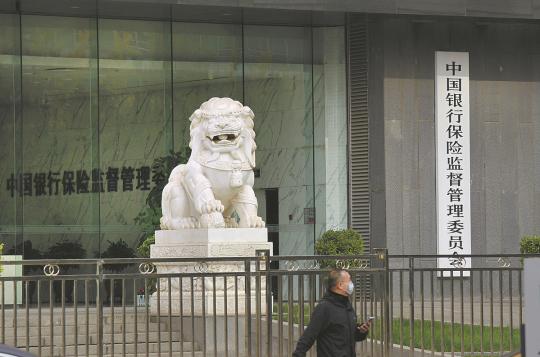 A pedestrian walks past the China Banking and Insurance Regulatory Commission in Beijing on Nov 4, 2021. (Photo by SU WEIZHONG/FOR CHINA DAILY)

The China Banking and Insurance Regulatory Commission recently announced it has revised measures for the administration of the insurance security fund together with the Ministry of Finance and the People's Bank of China, the central bank. The new measures will come into effect on Dec 12.

One of the major changes of the measures is that insurance security fundraising mechanisms will be adjusted to ensure that the balance of the fund is sufficient and stable, said Liu Xinqi, an analyst at Guotai Junan Securities Co, in a report.

As the regulator will improve the adequacy of the insurance security fund, it is expected that large insurance companies will benefit more from the revised measures, thanks to their competitive capital strength and operational mechanisms which follow regulatory compliance, whereas small and medium-sized insurers with limited capital adequacy ratios may face pressure to a certain extent, Liu said in the report.

Wang Guojun, a professor at the School of Insurance and Economics at the University of International Business and Economics, said: "The CBIRC assesses each insurer's solvency and risks every year. Under the new measures, those insurers facing higher risks will make greater contributions to the insurance security fund than before. Therefore, the regulator will incentivize insurers to enhance risk management by adopting a risk-oriented rate system."

The upcoming increase in the fund balance will help the insurance sector better deal with risks, especially when major risks broke out at several insurers at the same time. The regulator will establish a mechanism for insurance companies to exit the market, rather than repeating the too-big-to-fail problem, Wang said.

"The revised measures have also clearly defined by law the responsibilities and rights of financial institutions, their shareholders, actual controllers, ultimate beneficiaries and the insurance security fund after troubled insurance companies are taken over due to serious risks," he said.

Financial institutions as well as their shareholders, actual controllers and ultimate beneficiaries should strengthen their main responsibility of risk disposal. Financial regulatory authorities should further clarify their responsibilities of risk handling. Local governments must further improve enthusiasm for implementing the responsibility of dealing with risks within their territorial jurisdiction, said Guo in an article published in a reference guide to help better understand the guiding principles of the report to the 20th National Congress of the Communist Party of China.