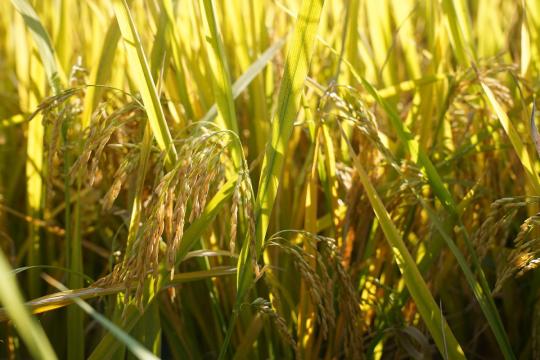 China's push for more irrigated farmland over the past seven decades has resulted in a quadrupling of such areas, which now account for about half of the country's arable land, according to the Ministry of Agriculture and Rural Affairs.

The expansion has contributed to consolidating national food security in the populous country where two-thirds of cropland are scattered across arid or semiarid regions, experts said.

However, the need for more efficient watering techniques — such as drip irrigation that provides targeted daily rations of water and fertilizer directly to a plant's roots — is "evermore urgent" as the country races to vitalize rural areas and modernize its agriculture.

There were around 16 million hectares of irrigated grainfield when the People's Republic of China was founded in 1949, a figure that rose to 68.6 million hectares last year, said Zhou Guomin, director of the Institute of Farmland Irrigation at the Chinese Academy of Agricultural Sciences.

Though accounting for slightly more than half of the country's arable land, irrigated plots have managed to produce three quarters of its grain output and more than 90 percent of commercial crops, he said at The First National Smart Irrigation Forum, which was held earlier this month in Xinxiang, Henan province, a major agricultural area.

Not only has the area expanded, the efficiency of watering techniques has been revolutionized.

Wu Hongwei, who is in charge of farmland development at the Ministry of Agriculture and Rural Affairs, said the water used for each hectare has dropped from 7,380 cubic meters in 1997 to 5,325 cubic meters last year.

"Developing water-saving irrigation is an important measure to accelerate agricultural and rural modernization," he said.

Data from the ministry showed that farming accounts for 60 percent of water use in China. Being one of the 13 most water-strapped countries globally, China's per capita water resources is one-fourth of the global average. Therefore, even a small reduction in water usage can have a sizable effect on total consumption.

As the country races to create high-standard farmland, a sprawling national project aimed at promoting large-scale mechanical farming and bolstering crop resilience against natural disasters, and the creation of demonstration zones for modernized agriculture, "the need for intelligent water conservancy and irrigation systems is ever more urgent", Zhou said.

Wu said the area of high-standard farmland is expected to reach 66.7 million hectares by the end of this year, with 40 percent equipped with efficient watering systems.

Mei Xurong, deputy director of the Chinese Academy of Agricultural Sciences, said that with 51 percent of its grainfields irrigated (the global average is 19 percent), there remains a gap between China and leading agricultural nations.

"It's the duty of the scientific community to bridge that gap," he said. "This is a question posed to us by the national strategy to strengthen the country through agriculture."