Nation to strive for world free from hunger 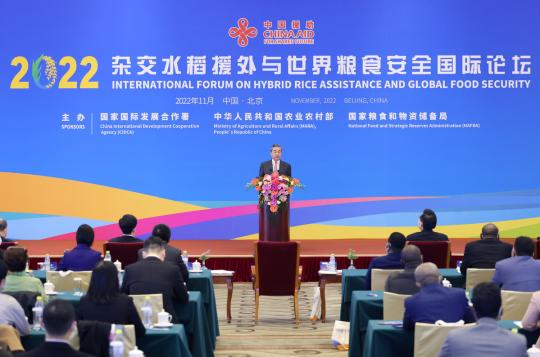 President Xi Jinping said on Saturday that China will work with all countries to make greater contributions to building a world free from hunger and poverty.

He made the pledge in a written speech delivered at the International Forum on Hybrid Rice Assistance and Global Food Security in Beijing.

Food security is fundamental to human survival, he said, pointing out that half a century ago, hybrid rice was first successfully developed and planted widely in China.

From 1979, hybrid rice began to be introduced to the world, benefiting nearly 70 countries across five continents, the president said, adding that this has been a remarkable contribution to their grain output growth and agricultural development, and offered a Chinese solution to the food shortages in developing countries.

At present, global food security faces severe challenges and complexities. China will continue to work with all countries in a spirit of solidarity and a shared future to advance the Global Development Initiative, scale up cooperation on food security and poverty reduction, and make greater contributions to the speedy implementation of the UN 2030 Agenda for Sustainable Development and to building a world free from hunger and poverty, he said. 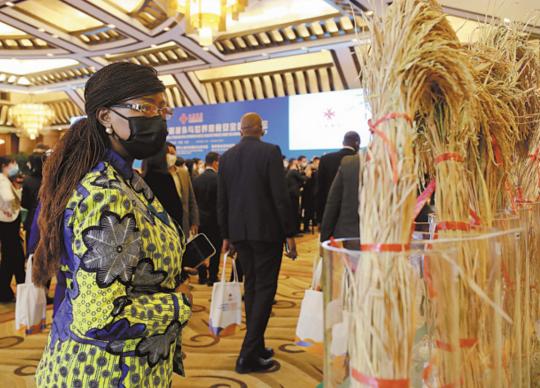 A visitor looks at a hybrid rice specimen at the International Forum on Hybrid Rice Assistance and Global Food Security in Beijing on Saturday. (CHEN ZEBING/CHINA DAILY)

Chinese State Councilor and Foreign Minister Wang Yi read out Xi's message at the forum, which was hosted by the China International Development Cooperation Agency, the Ministry of Agriculture and Rural Affairs and the National Food and Strategic Reserves Administration.

Leaders of a number of foreign countries, in video messages to the forum, said that China's hybrid rice research has benefited people throughout the world and expressed their willingness to continue working with China in this field.

Lao President Thongloun Sisoulith said the improving quality of China's hybrid rice research and analysis has brought substantial benefits to all humanity, which is part of China's efforts to combat the global food crisis and an important contribution to achieving the UN's Sustainable Development Goals.

Rice is the staple crop in Laos, and the development of high-quality rice varieties is of great significance for its food security and poverty alleviation, he said via video link.

He expressed his hope that China's hybrid rice assistance program will be scaled up in Laos and make a greater contribution to improving the living standards of the Lao people and tackling poverty.

Emmerson Dambudzo Mnangagwa, president of Zimbabwe, said the nation's government recognizes that food and nutrition security is not only a national but global issue that requires international cooperation, sectoral intervention and coordination at the highest level.

Zimbabwe looks forward to continuing to work closely with China and other global partners to further consolidate and advance food security in the country, the Southern African Development Community region, the African continent and beyond, he said.