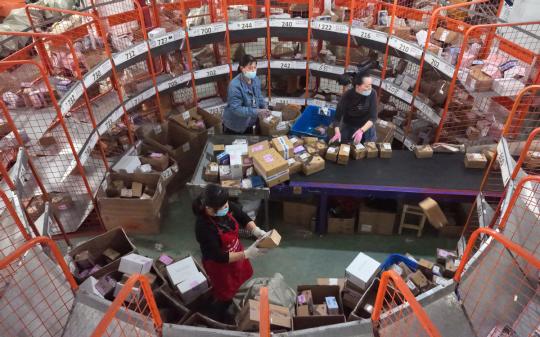 Workers sort packages at a sorting center of an express delivery company at the e-commerce industrial park in Hongze district in Huai'an, Jiangsu province, on Nov 1. (Photo by YIN CHAO/FOR CHINA DAILY)

Despite focus on customer loyalty and rational buying, 11-11 rocks

Retailers, they said, are keen to find a balance between promotions and long-term quality growth amid the intensified competition from livestreamed shopping events, the lingering COVID-19 pandemic and a gloomy world economic outlook.

Although Singles Day remains a top priority for China's retailers, this year's festival has confirmed that consumers have become more rational and are carefully reviewing their needs, with focus on purchasing daily necessities and high-quality products, experts said.

For the first time in the history of Double Eleven, both Alibaba and JD, another prominent e-commerce platform, did not disclose their final GMV figures for this year's shopping spree. Alibaba just said this year's sales revenue was in line with last year's GMV of 540.3 billion yuan ($76 billion). Industry experts said the GMV growth has been slowing due to the impacts of COVID-19 disruptions and consumers' rising concerns about future economic prospects.

Wang Xiaofeng, principle analyst from research firm Forrester, said record-smashing GMV had come to characterize past Double Eleven festivals, but "chasing high GMV is no longer the focus. Instead, improving customer experience and loyalty are key. Both retailers and brands have learned the importance of loyal customers, particularly in major shopping events like Double Eleven."

A report released by global consulting firm AlixPartners ahead of 11-11 said the festival would remain the biggest shopping event of the year in China, but consumers appear to have spent their hard-earned money more selectively this year.

Sampling nearly 2,000 consumers across different age groups and regions in China, the survey, conducted before 11-11, found that almost 60 percent of respondents intended to spend more this year compared to last year, while 14 percent planned to spend less amid the increasingly complicated economic environment and the rise of spending on products produced using sustainable practices.

The survey also found the value of goods and services has become a key consideration for consumers. While overall consumption remains stable and strong, 39 percent of all surveyed consumers said they pay more attention to product quality and will only spend when they have adequate product information.

The report said as global economic downward pressure might weigh on consumer sentiment and retail sales, some shoppers have become more cost-conscious. And 34 percent of all respondents said they would think twice before spending and would only spend when necessary.