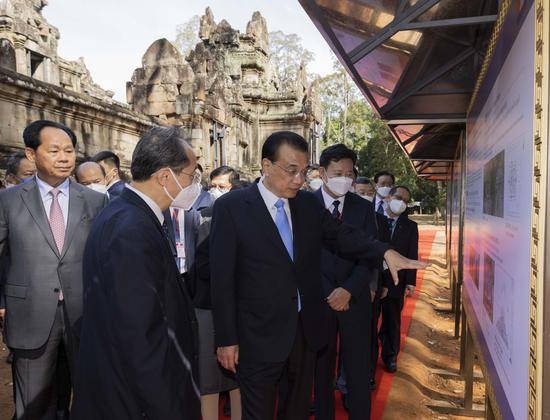 Premier Li Keqiang underlined on Thursday the importance of exchanges and cooperation in the development of state-to-state relations as he attended a ceremony marking the handover of the Ta Keo Temple restored with Chinese assistance in Siem Reap, Cambodia.

Li, who is paying an official visit to the Southeast Asian country, said in an address that both China and Cambodia have time-honored histories and splendid cultures, and mutual learning has contributed to the vibrant growth of bilateral relations.

The Chinese and Cambodian people's understanding and knowledge of each other's country and culture have laid a solid foundation for bilateral friendship, he said.

People-to-people interactions not only bring together diverse cultures, but also people's hearts, Li said, adding that this has a crucial role to play in keeping international industrial and supply chains stable and unimpeded.

The premier reiterated China's commitment to the fundamental national policy of opening-up, saying that China is ready to draw strength from all fine achievements of human civilization and engage in practical cooperation with all countries in economic, social, cultural and other areas.

The Ta Keo Temple is one of hundreds of stone monuments that make up the Angkor World Heritage, which contains the magnificent remains of different capitals of the Khmer empire.

In the early 1990s, the site was under major threat. The United Nations Educational, Scientific and Cultural Organization has since set up a wide-ranging program to safeguard the site and its surroundings.

Over the years, many countries from both the West and the East, have actively participated in the protection and restoration of Angkor.

The Ta Keo Temple Restoration Project that China handed over on Thursday is the second restoration project undertaken by China under the auspices of UNESCO's ICC-Angkor, an international coordinating mechanism to assist Angkor.

Li said Angkor encapsulates the splendid Khmer culture and is a source of national pride of Cambodia.

The project is good for Cambodia, good for China-Cambodia friendship, and good for inter-civilization exchanges and mutual learning, Li added.

Cambodian Deputy Prime Minister Chea Sophara, who also attended the ceremony as the representative of Cambodian Prime Minister Hun Sen, thanked China for its assistance to Cambodia in promoting economic and social development, and preserving its national culture.

Cambodia is ready to carry forward its long-standing friendship with China, and have even closer cultural and personnel exchanges with the Chinese side, he said.

The Chinese team started its first restoration project in Angkor in 1998. The members spent four years restoring the Chau Say Tevoda Temple from very bad shape with only remnants of the bases, according to Gu.