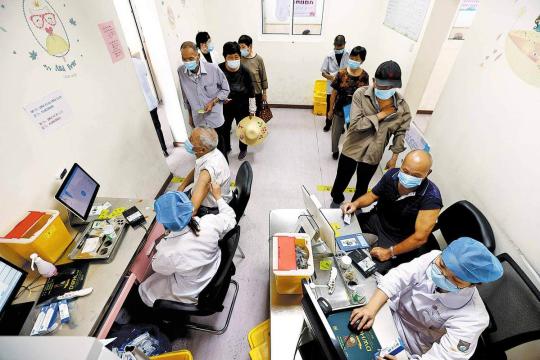 Elderly people wait to be vaccinated for seasonal influenza at a clinic in Huzhou, Zhejiang province, in September. (NI LIFANG/FOR CHINA DAILY)

Health experts have called for strengthening virus monitoring and vaccination to guard against potential co-circulation of influenza and COVID-19 this winter.

Gao Fu, an academician with the Chinese Academy of Sciences, said that Europe has experienced a new round of the avian flu epidemic since June and the United States has also reported an unprecedented outbreak of H5N1 among poultry, pointing to a high risk of the virus' spillover to humans.

"So a severe challenge facing us this winter and spring would be the dual spread of influenza and the COVID-19 disease," he said during a seminar on Tuesday.

The Chinese Center for Disease Control and Prevention said this week that influenza levels in China's southern provinces have registered a rapid increase since June and have hit a record high compared to the same period of the past five years.

"This suggests a high risk of surging flu cases this winter and spring season," it said, adding that schools, nursery care and elderly care facilities are the most susceptible to flu outbreaks.

Zhang Wenqing, head of the World Health Organization's Global Influenza Programme, said that since the second half of last year, flu activities across the globe have markedly increased, signaling a change from its consistently mild spread since COVID-19 emerged.

A more dramatic shift took place during this winter in the southern hemisphere, where some countries have registered higher flu incidence rates than pre-COVID levels.

She said efforts should be devoted to conducting year-round rather than seasonal monitoring for influenza, as well as promoting integrated monitoring of these two diseases.

In China, while mass COVID-19 vaccination has been climbing, flu inoculation is lagging.

The China CDC said that this year's evaluation and approval process for flu vaccines has been initiated earlier and supplies are higher than in past years.

"Research results show that flu vaccination can reduce the risk of hospitalization for children by 53 percent, and decrease the chance of hospital visits for immunocompromised elderly by over 40 percent," it said. "The elderly, people with underlying illnesses, medical workers and children are suggested priority groups for flu immunization."

Gauden Galea, the WHO representative in China, said that globally there are an estimated total of 1 billion influenza cases, and 290,000 to 650,000 related respiratory deaths each year.

"The situation is further complicated by the COVID-19 pandemic. The pandemic is not yet over and there are suggestions that another global wave of infection has begun, in addition to the arrival of autumn and winter, the resurgence of influenza can be expected."

He added that to encourage higher uptake of both COVID-19 and flu vaccines, countries can consider administering both vaccines during the same visit.

Mark von Itzstein, a researcher at Griffith University's Institute for Glycomics in Australia, said during the event that research into rapid testing kits and long-lasting drugs for influenza should be stepped up.

"The lesson we should learn from the current situation is that rapid diagnostics that are readily available to individuals, instead of having to go to a physician, are very important," he said.