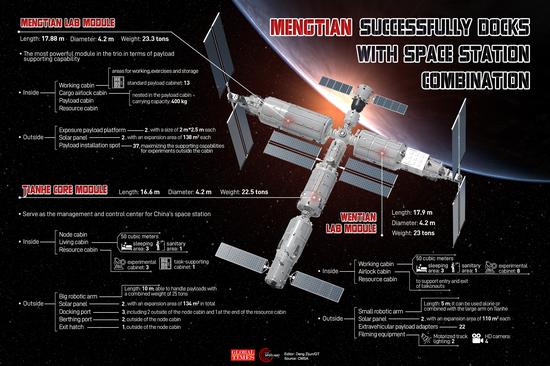 The Mengtian, the third and last part of the three-module China Space Station basic structure that docked with the orbiting combination of earlier modules early on Tuesday, is expected to carry out a transposition maneuver on Thursday, after which the China Space Station will complete the formation of the T-shape structure.

Sources with the China Manned Space Agency (CMSA) confirmed with the Global Times on Wednesday that the transposition of the Mengtian from the Tianhe's forward docking port to the space station core module's docking ring on the side will happen on Thursday.

Yi Zhikun, chief designer of the manned space product department of the Shanghai Academy of Spacecraft Technology (SAST,) the main contractor and developer of the Mengtian lab module, told the Global Times that the Mengtian's transposition, just like the Wentian's operation, will involve similar stages such as the unlocking and separation of the lab module from the core module's forward port, and the berthing, locking and sealing with the side port after the transposition to form a two-way passage between the modules.

"Only when the three modules complete their assembly and form the T-shape structure in orbit, can we declare that we have achieved all preset goals. Only when they complete the T-shape basic structure, can the power supply, information and thermal control systems deliver their best performances and support relatively larger experiments," Bai Linhou, deputy chief designer from the space station system at the China Academy of Spacecraft Technology (CAST), told the Global Times, explaining why the feat was of great significance in the overall building of the China Space Station.

Pang Zhihao, a Beijing-based senior space expert, told the Global Times on Wednesday that the forming of the T-shape structure after the transposition of Mengtian would also make the three-module space station combination symmetrical, which will reduce the energy consumption used to maintain the space station's altitude.

The CAS scheduled some 40 scientific experimental projects in these fields, and they will be carried out in accordance with the overall plan.

The world's leading multidisciplinary science journal Nature on October 28 reported that the Chinese Tiangong Space Station "is expected to host more than 1,000 scientific experiments over its lifetime of at least 10 years."

These include studying the effects of microgravity on living tissues and the behavior of fires, the Nature article said.