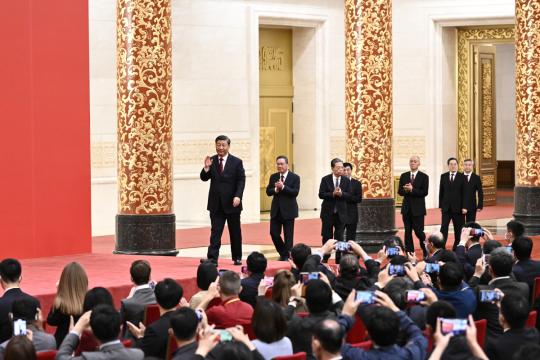 With the realization of the goal of the great rejuvenation of the nation on the horizon, the responsibility falls on the shoulders of the new leadership of the Party to inspire the Chinese people of all ethnic groups to forge ahead on the Chinese path to modernization.

That's why, when expressing appreciation for the trust the Party had placed in them to fulfill this responsibility during the Standing Committee's first collective meeting with the media on Sunday, General Secretary of the CPC Central Committee Xi Jinping, on behalf of the new leadership of the Party, emphasized that they will always bear in mind the nature and purpose of the Party and its missions, and promised they will work diligently to fulfill their duties and not betray the great trust placed in them by the Party and the people.

That's also why the Resolution of the 20th National Congress of the CPC stated that on the road ahead, the new leading group must firmly uphold and strengthen the overall leadership of the Party, adhere to the path of socialism with Chinese characteristics and people-centered development, deepen reform and opening-up, and carry forward the spirit of struggle.

These principles, crystallized in Xi Jinping Thought on Socialism with Chinese Characteristics for a New Era, have been drawn from and tested over the past 10 decades since the Party was founded. Over the past 10 years, the Party's leadership, with Xi at its core, has effectively coped with the huge risks and challenges that have resulted from the complex international situation, pushed forward socialism with Chinese characteristics and made remarkable achievements in the cause of the Party and the country.

That has made the Party stronger and more capable, the Chinese people more confident and united, and the connections between the two more inseparable and focused. As a result, as the Resolution of the 20th CPC National Congress noted, socialism with Chinese characteristics is demonstrating its vitality and potential in the new era, and the great rejuvenation of the Chinese nation has become an irreversible historical process.

The numerous congratulatory messages the Party has received from around the world on the successful conclusion of its 20th CPC National Congress speak volumes of the great hopes that members of the international community, in particular those of the Global South, have pinned on it in the expectation that it will carry forward its legacy and break new ground in fulfilling its mission of serving the Chinese people and promoting the common development of humankind.

Having demonstrated the wisdom and resolve to effectively overcome all the difficulties and challenges the country has faced on the journey so far, confidence is high that the new leadership will not only be able to adapt the new development philosophy to the changing times and lead the country's continued advance on the road to modernization, but also make more contributions to world peace and development.

Under the strong leadership of the Party, there is no doubt that China will continue to work together with all peace-loving nations to safeguard world peace and promote global development through wider opening-up, and that it will continue to contribute Chinese wisdom and solutions to address the pressing global challenges and promote the building of a community with a shared future for mankind.