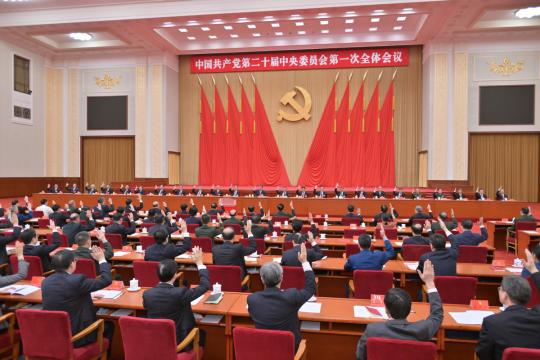 The 20th Central Committee of the Communist Party of China holds its first plenary session in Beijing on Sunday, Oct 23, 2022. (Photo/Xinhua)

Heads of state from a number of countries have congratulated Xi Jinping on his election as general secretary of the 20th Central Committee of the Communist Party of China on Sunday.

Russian President Vladimir Putin sent a congratulatory message to Xi on Sunday, saying that the results of the 20th CPC National Congress "fully confirmed your high political authority and the unity of the party you head".

"I am certain that the resolutions of the congress will help successfully implement the grand social and economic tasks facing China, and will assist in strengthening the country's position on the international arena," Putin said in a news release on the website of the Kremlin.

"It would be a pleasure for me to carry on our constructive dialogue and close joint work to develop the relations of comprehensive partnership and strategic alliance between our two states," he added.

He said he believed that the CPC will work together with the progressive forces in the world to continuously promote global equality, justice, peace and development.

Argentine President Alberto Fernandez, also president of the country's Justicialist Party, said that China, led by Xi, has secured tremendous achievements in various aspects and greatly lifted the living standards of the Chinese people, setting an example for countries in the world.

He expressed his wish that China can continue to attain more glories under Xi's leadership.

South Sudanese President Salva Kiir said he and his party, the Sudan People's Liberation Movement, will stay committed to working with the CPC and continuously developing the friendship between the two nations and two parties.

Belarusian President Alexander Lukashenko congratulated Xi on his reelection, which he said reflected Xi's high authority and the staunch support of the more than 96 million CPC members.

He said he believed that the CPC's goal of building a strong socialist nation in all respects will certainly be realized.

Kazakh President Kassym-Jomart Tokayev said that Xi's election proved there is a high level of support for him from all Chinese people, adding that he is willing to work with Xi to further deepen the bilateral permanent comprehensive strategic partnership.

Kyrgyz President Sadyr Zhaparov said the election results from the 20th CPC National Congress demonstrate a high level of trust and support for Xi from the Party and the Chinese people, and Kyrgyzstan stands ready to continue deepening cooperation with China and keeping the bilateral relations moving forward.

The Chinese people have completely supported the policies of the CPC, led by Xi, for realizing national modernization and rejuvenation and enhancing public well-being, he said.