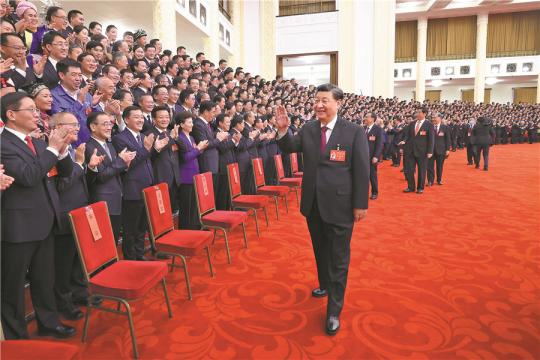 Xi Jinping, general secretary of the Communist Party of China Central Committee, waves to the delegates of the 20th CPC National Congress at the Great Hall of the People in Beijing on Sunday. (Photo/Xinhua)

The 20th Central Commission for Discipline Inspection of the Communist Party of China, the Party's top discipline and anti-corruption watchdog, elected its new leadership at its first plenary session on Sunday as Li Xi was elected its secretary.

All but one of the 133 members of the 20th CCDI attended the session, in which its deputy secretaries and standing committee members were also elected. The results of the election were later approved by the first plenary session of the 20th CPC Central Committee. 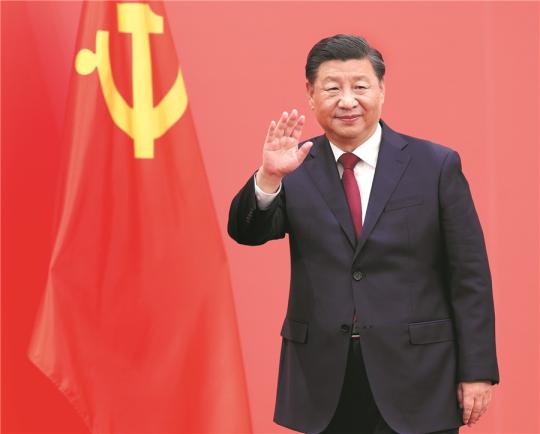 Xi Jinping, general secretary of the Communist Party of China Central Committee, greets Chinese and foreign journalists at the Great Hall of the People in Beijing on Sunday. (Photo/Xinhua)

In the past five years, the Party has made significant advances in exercising full and rigorous self-governance, said a resolution on an amendment to the Party Constitution adopted at the closing session of the 20th CPC National Congress on Saturday.

According to the resolution, the Congress agreed to add statements to the Party Constitution on the Party's self-reform being a journey to which there is no end and on constantly improving the system of Party regulations.

The statements would include that integrated efforts would be made to ensure that officials do not have the audacity, opportunity or desire to become corrupt, according to the resolution.

These additions will help all Party members maintain a spirit of self-reform, it said, thus ensuring "the Party grows stronger through revolutionary tempering and remains the strong leadership core in the cause of socialism with Chinese characteristics".

Zhou Weizhong, a delegate to the Congress from a village in Yizheng, Jiangsu province, said anti-graft efforts in past years have greatly improved the working style of officials from the grassroots.

"People now have increasing trust in and satisfaction with local Party organizations and officials. They have a firm belief in the Party's policies and the progress of the country," he said. 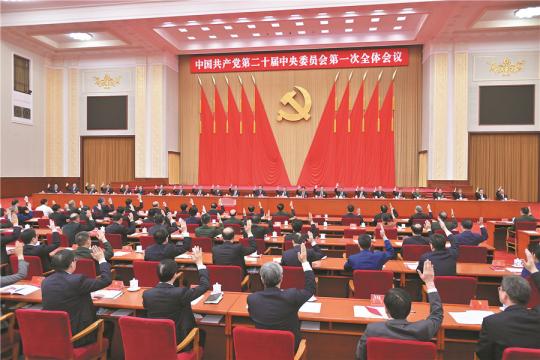 The 20th Central Committee of the Communist Party of China holds its first plenary session on Sunday in Beijing. The session, presided over by Xi Jinping, was attended by 203 members of the 20th CPC Central Committee and 168 alternate members. (Photo/Xinhua)

Dong Chun, a delegate who works at the front lines of scientific research, said that as the Party faces some challenges and risks that may remain for a long time, strict governance over the Party and its self-reform should continue as always.

Yang Weidong, a law professor at China University of Political Science and Law, said the work of anti-corruption and strict Party governance in the future will continue to focus on solving severe corruption cases that have a great social impact and problems in areas that closely affect people's livelihoods.

This will include cases that have substantial impact, such as corruption involving political and economic elements and in sectors with a high concentration of power, funds and resources, he said.

Yang said firm action will also be taken to regulate the power and work conduct of low-ranking officials whose misconduct could directly affect the public's daily life.

"These officials may not hold high positions or may have embezzled small amounts of money, and their misbehavior may not have serious consequences in the short term. However, over the long term, their bad work conduct would infect other grassroots staff, thus corrupting the entire organization from the root, as their number is huge," he said.