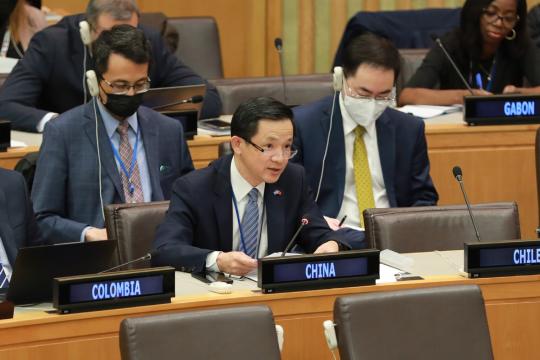 A Chinese envoy on Thursday firmly refuted groundless accusations on China's human rights, saying the world does not need condescending remarks or the politicization of human rights.

"What the U.S. and a handful of Western countries really care about is not China's human rights but interfering in China's internal affairs under the pretext of human rights with the aim of suppressing and containing China, safeguarding their own hegemony," Dai Bing, charge d'affaires at the Chinese Permanent Mission to the United Nations, said at a meeting of the Third Committee of the UN General Assembly.

They "reject the truth", "repeat lies", and "engage in coercive diplomacy", said Dai. "But today the people of the world have awakened, and the vast number of developing countries have awakened. Anyone who engages in hegemony will be opposed, and whoever engages in coercion will be doomed to failure."

"The U.S. is obsessed with naming and attacking other countries, turning a blind eye to its own human rights situation, focusing only on developing countries, and is selectively blind to the human rights abuses of its allies," said Dai, calling this behavior "hypocrisy and double standards".

The Third Committee is a platform for dialogue and cooperation, not for confrontation, Dai said on Wednesday at the Third Committee of UNGA, adding that the world needs fairness and justice. There is "no need for a 'teacher' to boss around other countries", the envoy said.

Dai also made a joint statement at the Third Committee meeting on behalf of 25 countries, calling for the immediate and complete lifting of unilateral coercive measures.

Dai said developing countries and their populations continue to fall victim to unilateral coercive measures, which run counter to the purposes and principles of the UN Charter and international law, multilateralism, and the basic norms of international relations.

Zimbabwe agreed with the statements delivered by China on Wednesday, and it supports the universality and the non-politicization of human rights, said Garikai Manyanga, a Third Committee expert from Zimbabwe.

Some states' "holier than thou" attitudes are self-serving and counterproductive, he said, stressing that dialogue is the best way forward for those that are lagging.

Venezuela, speaking on behalf of the Group of Friends in Defense of the Charter of the UN, an organization launched last year in the UN that consists of 19 countries including China, noted the increase in unilateralism and practices causing divisions. The nation also rejected double standards in human rights.

Venezuela expressed concern over the growing proliferation of mechanisms and procedures that conduct assessments of human rights in specific states and which, in most cases, lack their due consent and participation, said Joaquin Perez Ayestaran, the representative of Venezuela. Instead, these assessments rely on sources that may be biased or not credible.