National security is the guarantee for development 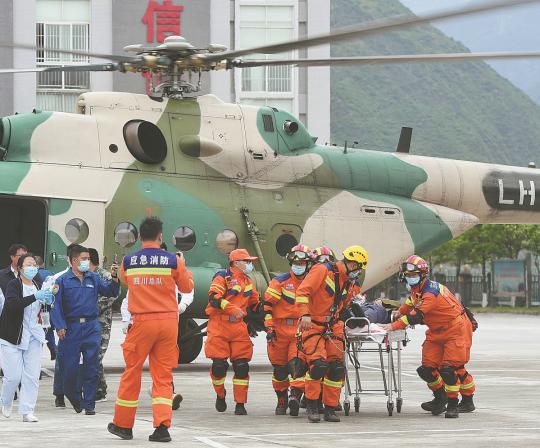 Rescuers transfer an injured earthquake victim to medical workers in Luding county, Sichuan province on Thursday. The injured, Luo Yong, is a power company employee who had been trapped for more than three days after the earthquake hit the county at noon on Monday. (Photo by HUA XIAOFENG/FOR CHINA DAILY)

The report delivered at the opening of the 20th National Congress of the Communist Party of China in Beijing on Sunday stressed the importance as well as the urgency of modernizing China's national security system and capacity and safeguarding national security and social stability.

It is a major principle of the Party's long-term governance to balance development and security, increase its awareness of potential dangers, and keep danger in mind in times of peace.

To modernize the national security system and capacity is a necessary requirement for improving the system of socialism with Chinese characteristics and modernizing the national governance system and capacity. In addition, China's development over the past decade has greatly expanded the scope of security work necessitating the establishment of a comprehensive national security system to safeguard the country's sovereignty, security and development interests.

The increasingly complicated internal and external development environment reminds the nation of the importance of properly handling the relationship between development and security.

The purpose of strengthening national security is to safeguard the pursuit of high-quality development and escort the advancement of Chinese modernization.