China to uphold its core interests 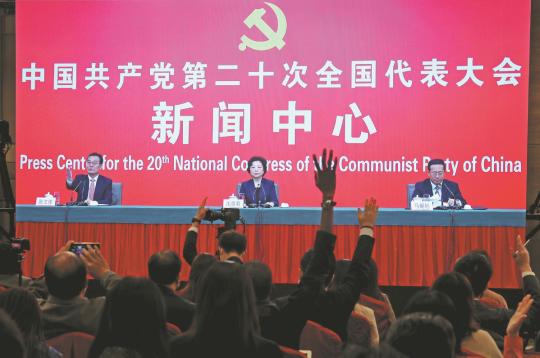 Journalists raise their hands to ask questions via video link at a news conference in Beijing on Thursday on China's diplomacy held on the sidelines of the 20th National Congress of the Communist Party of China. (Photo by WANG ZHUANGFEI/CHINA DAILY)

China's diplomacy will resolutely safeguard its national sovereignty and security and development interests, Vice-Foreign Minister Ma Zhaoxu said on Thursday at a news conference on the sidelines of the ongoing 20th National Congress of the Communist Party of China.

Ma cited the report delivered by Xi Jinping at the congress' opening session, saying China has entered a development period in which strategic opportunities, risks and challenges are concurrent, and uncertainties and unforeseen situations are growing.

The country has firmly upheld its national dignity and core interests, and has taken the initiative to enhance development and security, Ma said.

China remains committed to following its own path on human rights, opposes the politicization of issues related to human rights and will not accept any condescending lecturing, Ma said.

Nearly a hundred countries have voiced support for China's just positions and expressed opposition to meddling in China's internal affairs in the name of human rights, he added.

Beijing objects to unilateral sanctions and heavy pressures of various kinds. And it will not accept any zero-sum game or law of the jungle, Ma said.

While highlighting that China steadfastly pursues an independent foreign policy of peace, he said Beijing will not be subject to the might of power. The country will uphold justice and resolutely oppose any form of hegemony or power politics.

"Our resolve to safeguard China's sovereignty and territorial integrity as well as the fundamental interests of the Chinese nation will be rock solid and unshakable," he said.

Shen Beili, vice-minister of the International Department of the CPC Central Committee, said at the same news conference that the Party will not point fingers at the internal affairs of political parties of other nations, nor will it seek to export the Chinese model or require other nations or parties to copy its practices.

She emphasized that the Party will not accept condescending or sanctimonious preaching, or blindly borrow other countries' political systems.

Shen said it is important for different countries' political parties to seek common ground, while reserving differences, and to step up mutual learning, which is instrumental to promoting progress in human civilization.

The Party will continue to carry out exchanges with political parties from other nations related to national governance, and jointly bolster party building and governance capacities to benefit people and advance human civilization, she added.

"We are always concerned with the safety and well-being of every one of our compatriots," Ma said.

He said the recent Chinese movie, Home Coming, is a vivid reflection of the country's efforts to evacuate its overseas citizens from turmoil, as China has organized nearly 20 emergency evacuations of Chinese nationals from abroad over the past decade.

It has successfully evacuated over 5,200 Chinese amid the Ukraine crisis, said Ma, who also reminded Chinese citizens remaining in Ukraine to leave the country as soon as possible.

He added that China has made mutual visa exemption agreements or arrangements with 150 countries over the past decade, which has greatly improved the value of Chinese passports. And it has handled more than 500,000 consular protection cases involving millions of Chinese citizens.