Increases in SOE revenue to shore up nation's growth 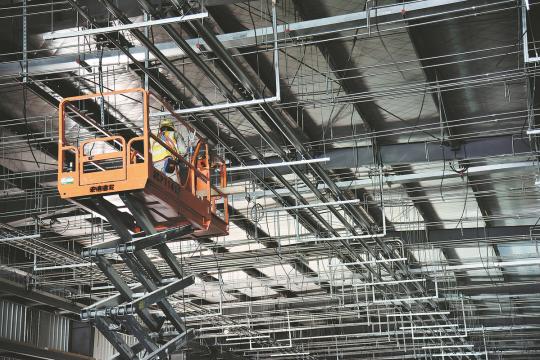 The steady revenue growth of centrally administered State-owned enterprises is expected to shore up China's economic growth and propel the successful completion of its three-year (2020-22) action plan this year, government officials and SOE executives said.

The plan is designed by the government to push SOEs to adapt to market-oriented and law-based rules and norms as soon as possible, and assume greater responsibility in an open and innovative environment.

Combined profits of central SOEs rose 4.3 percent year-on-year to 1.92 trillion yuan ($266.66 billion) in the first seven months, while their operating revenue surged 10.6 percent on a yearly basis to 2.57 trillion yuan, the Ministry of Finance said.

Together with policy measures to assist central SOEs in improving production and service efficiency, and bringing down debt ratios, the rise in revenue will better bolster China's economic growth this year despite challenges that threaten global economic recovery, said Li Jin, chief researcher at the China Enterprise Research Institute in Beijing.

Weng Jieming, vice-chairman of the State-owned Assets Supervision and Administration Commission of the State Council, said the government will quicken the integration of resources among central SOEs and carry out an in-depth restructuring of the same or similar businesses.

Weng, addressing a meeting in Beijing in early September, said that central SOEs will play a greater role in keeping production and supply chains stable, strengthening weak links in the economy, and completing the goals set for the three-year action plan by the year's end.

Boosted by mixed-ownership reform, progress in central SOEs' strategic restructuring and professional integration and surging innovation activities, China's central SOEs completed over 95 percent of the measures outlined in the three-year plan by the end of June.

In addition to attracting 380 billion yuan of private capital last year, major restructuring was completed in some leading central SOEs in sectors from steel to technology. Several industrial groups were established in the sectors of space, logistics and resources, including China Satellite Network Group Co Ltd and China Rare Earth Group Co Ltd.

Despite challenges to industrial chains from the COVID-19 pandemic and external uncertainties, the SOEs, backed by supportive measures, have been ramping up efforts to respond to the government's call to improve livelihoods and keep the economy on a stable growth track, said Hu Chi, a researcher at the SASAC's research center.

China Construction Second Engineering Bureau Ltd, which is a subsidiary of Beijing-based China State Construction Engineering Corp, completed the construction of a test site for intelligent and connected vehicles to provide research and development, testing and authentication services in August for various parties in Wuhan, capital of Hubei province.

The test site, scheduled to be operational by the year's end, is expected to attract more automakers, R&D institutions in the field of autonomous driving, intelligent networking software and hardware providers and component manufacturers to conduct testing activities and verification business, said Li Jixin, the site's project manager.

The test site, with a total investment of 4 billion yuan, incorporates a series of cutting-edge technologies such as big data, artificial intelligence, 5G and edge computing, the latter of which is a distributed framework that brings applications closer to data sources. The site covers 87.5 hectares and includes 10 scenario testing areas, four lab clusters and a Formula 2-level racing track.

"The site is like a supermarket of test items. It has road scenarios such as ring expressways, urban arteries and country roads to satisfy all the testing needs for producing qualified ICVs," Li added, referring to intelligent and connected vehicles.

The wind farm can generate 230 million kilowatt-hours of electricity annually, eliminating 206,000 metric tons of greenhouse gas emissions and saving the use of 89,000 tons of standard coal per year.

"The enhanced rail and road transportation networks between China and Central Asian countries will help companies from both sides expand and deepen cooperation in the areas of infrastructure, petrochemicals and logistics in the coming years," he said.

China's SOEs saw the total value of their foreign trade grow 15.1 percent on a yearly basis to 4.4 trillion yuan in the first eight months of 2022, accounting for 16.1 percent of the value of China's total exports and imports during the period, according to the General Administration of Customs.