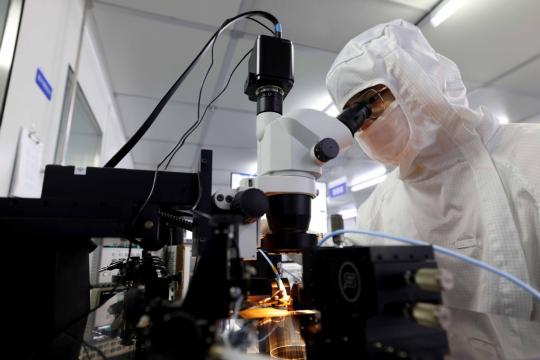 Amid the shift toward innovation-driven development, China has made significant progress in industrial upgrading, moving from a focus on light, export-oriented industries to more capital-intensive, self-contained ventures, kickstarting new growth drivers and business forms, a recent report showed.

According to the report, released by the National Bureau of Statistics, in 2021, the industrial output of major high-tech manufacturers made up 15.1 percent of the total value-added industrial output, 5.7 percentage points higher than 2012.

Government and industry have both pivoted in the last decade toward the promotion of scientific and technological innovation as a more sustainable engine of growth.

In 2021, 2.8 trillion yuan ($390.8 billion) was invested in research and development, 1.7 times more than in 2012. The ratio of R&D expenditure to overall GDP stood at 2.44 percent, nearing the average for the Organization for Economic Cooperation and Development countries.

At the end of 2021, the country had a total of 330,000 high-tech enterprises and 4,762 "little giants", a State designation for small and medium-sized enterprises that specialize in strategically important industries such as software or artificial intelligence, spent a high proportion of operating capital on R&D, and are able to aid the country in creating wholly domestic supply chains.

The number of authorized patents, a significant barometer for the pace of innovation, registered an average annual growth of 15.5 percent over the past decade.

The government has also made an effort to optimize mechanisms for financing technology firms. The sci-tech innovation board was launched in 2019 on the Shanghai Stock Exchange, and the Beijing Stock Exchange opened for trading in 2021, providing more financing channels for small and medium-sized, innovation-focused firms.

Growth results have been palpable. Official data showed that 46 of the around 2,200 listed national firms in emerging industries are valued at over 100 billion yuan, up from zero 10 years ago.

One of the most landmark changes in China over the past decade has been the creative blurring of the real and digital economies.

Cashless transactions have largely replaced cards and wallets and e-commerce has taken up an increasing proportion of the country's consumer market. Online retail sales of physical goods exceeded 10.8 trillion yuan in 2021, accounting for 24.5 percent of the total retail sales of consumer goods, the report noted.

Driven by the record-setting online retail sales volume, China's courier sector has been busier than ever. It handled 108.3 billion parcels in 2021, the largest number in the world.