Elderly care beds in China have more than doubled since 2012 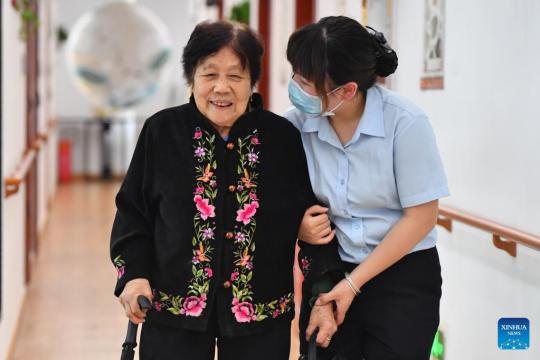 The number of beds at elderly care institutions across China has more than doubled since the end of 2012 to nearly 8.13 million in the first quarter of this year, officials said on Tuesday.

Li Yongxin, deputy director of the Department of Elderly Care at the Ministry of Civil Affairs, said that central finance has dedicated 35.9 billion yuan ($5.12 billion) toward building elderly care facilities.

"So far, community-level elderly care services cover all urban neighborhoods and more than half of those in rural communities," he said. "As of March, the country has over 360,000 elderly care facilities."

Meanwhile, China has built nearly 6,500 integrated medical and elderly care facilities with a total of 1.75 million beds, according to Wang Haidong, director of the National Health Commission's Department of Aging and Health.

China is aging rapidly, with the number of people aged 60 and over reaching 267 million and accounting for 18.9 percent of its population by the end of last year.

It is estimated that the elderly population will top 300 million by 2025 and 400 million by 2035. The size of China's senior population and its proportion of total population are expected to peak around 2050, posing huge challenges to the provision of public services and to the national social security system, said Wang.