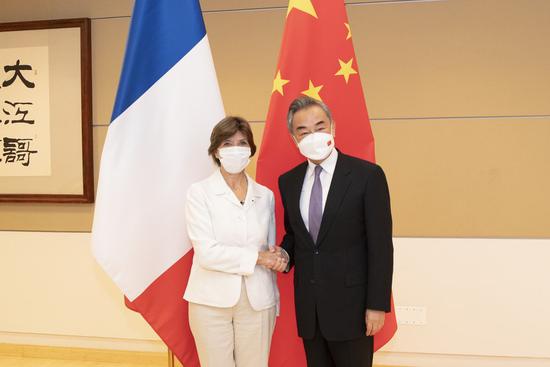 Congratulating France on taking the rotating presidency of the UN Security Council, Wang said that China and France, both permanent members of the Security Council, shoulder important responsibilities in maintaining international security and stability.

China is ready to maintain high-level exchanges and strengthen solidarity and coordination with France to jointly tackle the ever-emerging global challenges and inject more positive energy and stability into the world, said Wang.

For his part, Colonna said France-China relations are very important and both countries have the diplomatic tradition of staying committed to keeping peace.

Amid the profound changes in the international landscape, the goal of France and China to sustain the world peace and stability has not changed, neither have their efforts to mutually rely on each other to jointly safeguard the purposes and principles of the UN Charter, Colonna said.

The French side is satisfied with the close and good communications between both heads of state and the smooth advance of bilateral exchanges, she said, expressing thanks to China for helping France Airline restore direct flights to China as well as for helping French students resume their study in China.

Colonna voiced hope that the two sides will deepen cooperation in such fields as climate change, biodiversity and food security.

China and France have maintained an overall stable relationship amid the ever-evolving international landscape, thanks to the strategic communication between the two heads of state, which has provided strategic guidance for the development of bilateral ties and multilateral cooperation, Wang said.

Appreciating France's consistent adherence to strategic independence, Wang said China is ready to strengthen coordination with France and advance cooperation in areas like climate change, biodiversity and food security so as to jointly deal with global challenges.

They also exchanged views on the Ukraine crisis. Colonna expressed concern over a protracted and escalating conflict while Wang said China always advocates solving the disputes through dialogue and will continue to play a constructive role in promoting peace talks.