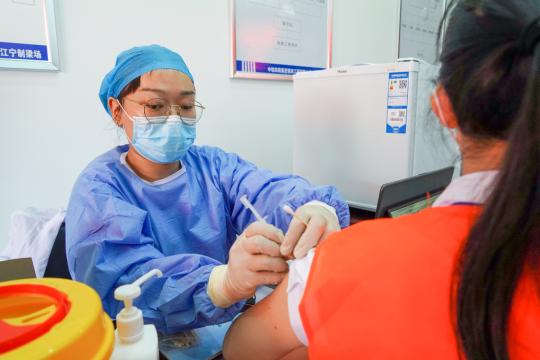 A two-dose inhaled COVID-19 vaccine developed by Chinese researchers appears to be safe and capable of eliciting strong immune responses comparable to those of its one-dose injected counterpart, a preliminary study released this week said.

Cansino Biologics, which created the vaccine with the Academy of Military Medical Sciences' Beijing Institute of Biotechnology, said it is the first company in the world to publish clinical data on an aerosol COVID-19 vaccine.

Results from its early stage human trial are promising and support further research into what promises to be an effective and economical candidate, it said.

The company's injectable COVID-19 vaccine gained conditional approval from the top drug regulator in late February, and the new version is identical in terms of composition, packaging and manufacturing process, except that it is delivered through inhalation and contains a lower dosage－about one-fifth that of the injection.

The study's results were published in The Lancet Infectious Disease, based in the United Kingdom, on Monday. It recruited 130 volunteers aged 18 or older in late September. They were given five different vaccine combinations that varied in dosage and delivery method.

The results show that the inhaled vaccine, known as aerosolized Ad5-nCoV, was well tolerated, with no severe adverse reactions reported. The most common symptoms included fever, fatigue and headache.

The study said the proportion of participants reporting adverse reactions was markedly higher among those who received injections than among those in the inhalation group.

In terms of efficacy, the study said one dose of the inhaled vaccine could induce a strong immune response, and after two doses, it "could produce similar SARS-CoV-2 neutralizing antibody titers (concentrations) as one dose of intramuscular vaccination".

The study also looked into the effects of first administering an injection and then delivering the second dose through inhalation as a booster, which also triggered robust antibody responses.

"In conclusion, the aerosol inhalation of Ad5-nCoV is painless, simple, well tolerated, and immunogenic, and the current data support the evaluation of aerosolized Ad5-nCoV in ongoing phase 2 and 3 clinical trials," the study said. It added that the study was limited in that the sample size was relatively small.

No inhaled COVID-19 vaccines have been approved for use, but researchers around the world have stepped up research due to their potentially unique strengths.

Hou Lihua, a researcher at the institute, told China Central Television that the new vaccine could potentially increase the willingness of the public to get vaccinated because of the lower rates of adverse events.

The product's lower dosage could also relieve some pressure on production capacity, he said, adding that the inhalation method also obviates concerns about medical waste such as syringe needles.

Yu Xuefeng, chairman and CEO of Cansino, said in an earlier interview that in addition to humoral and cellular immune responses－protections triggered by regular injected vaccines－inhaled vaccines can induce an extra layer of protection known as mucosal immunity.

"Because the novel coronavirus usually invades human bodies through the respiratory mucosa, setting up the first defense against the virus at its inception point will generate good protective effects," he said.