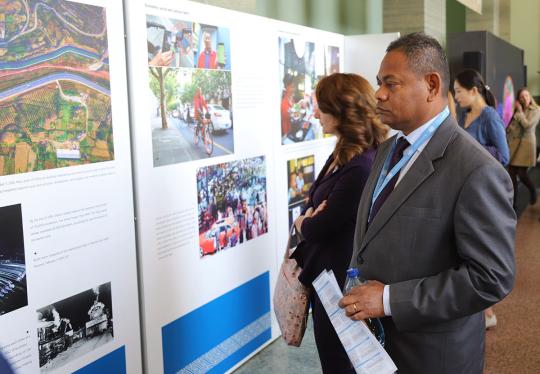 An exhibition showcasing China's progress in human rights opened at the United Nations' main office in Geneva, Switzerland, on Monday.

The exhibition, named Pursuing Happiness for the People: 70 Years of Human Rights Progress in China, displays some 120 photos as well as films and virtual reality videos related to the topic.

Mauritania's permanent representative at the UN Office at Geneva, Mohamed El Habib Bal, spent nine years as his country's ambassador in Beijing before taking up his new post early this year.

"It's a very good exhibition," he said. "I appreciate the effort made by China in human rights."

Arline Diaz, Venezuelan counselor to the UN Office at Geneva, was particularly impressed by a VR video showcasing landscapes of the Great Wall, mountains, rivers and cities.

"They are generating electricity with solar panels. So amazing," said Diaz, who has traveled extensively around the country.

Lu Guangjin, director-general of State Council Information Office's human rights department, said the happiness of the people and further development of human rights are high priorities for the Communist Party of China.

"The achievement of China's development boils down to one fact: The livelihoods of the Chinese people have been improving day by day," Lu said at the exhibition's opening ceremony on Monday, which coincided with the opening of the 42nd session of the UN Human Rights Council.

Gennady Gatilov, Russia's permanent representative to the UN Office at Geneva, said China has made significant steps in promoting human rights over the last 70 years.

Gatilov said Russia and China have a common vision about how to promote human rights according to the UN Charter and on the basis of the rule of law and international agreements. "We will be continuing our fruitful cooperation with Chinese colleagues and friends here in Geneva," he added.

Kham-Inh Kitchadeth, the Laotian permanent representative to the UN Office at Geneva, said: "I know personally the evolution of human rights in China. The country has made major achievements in human rights. China's great achievements are important to learn for other developing countries."

Speaking at the opening ceremony, China's permanent representative to the UN Office at Geneva, Chen Xu, said the collection of more than 100 photos and dozens of short videos "captures some wonderful moments over the past seven decades as China consistently made progress in human rights, improved the well-being of its people and made joint efforts with international partners for better human rights protection".

At a related event on Monday during the UN Human Rights Council session, Chinese human rights experts and academics shared their research and personal experiences of human rights progress in various fields.

"China's human rights cause has achieved comprehensive progress," said Wu Leifen, deputy secretary-general of the China Society for Human Rights Studies, citing a long list of statistics which show China's phenomenal progress in everything from per capita GDP growth, education and longevity to poverty alleviation and the rule of law.